Multicorder research has been done individually and simultaneously on these five sensors: electrochemical,  ion-sensitive field-effect transistor (ISFET), photodiode, single phton avalanche diod (SPAD), and photonic sensors. Two flagships are listed here, and Flagship 1 is detection with single sensor and Flagship 2 is Detection with multiple sensors. We are aiming to build a low cost point of care platform that is capable of early diagnostics of human disease.

Five sensors are introduced here. As individual sensors, they work quite well.

An ISFET is an ion-sensitive field-effect transistor, that is a field-effect transistor used for measuring ion concentrations in solution; when the ion concentration (such as H+) changes, the current through the transistor will change accordingly. Instead of metal, the solution is used as the gate electrode. The surface hydrolysis of Si-OH groups of the gate materials varies in aqueous solutions due to pH value. The device reported here was processed with a layer of Ta2O5 that gives a detection sensitivity to 45 mV/pH unit at the sensor readout. 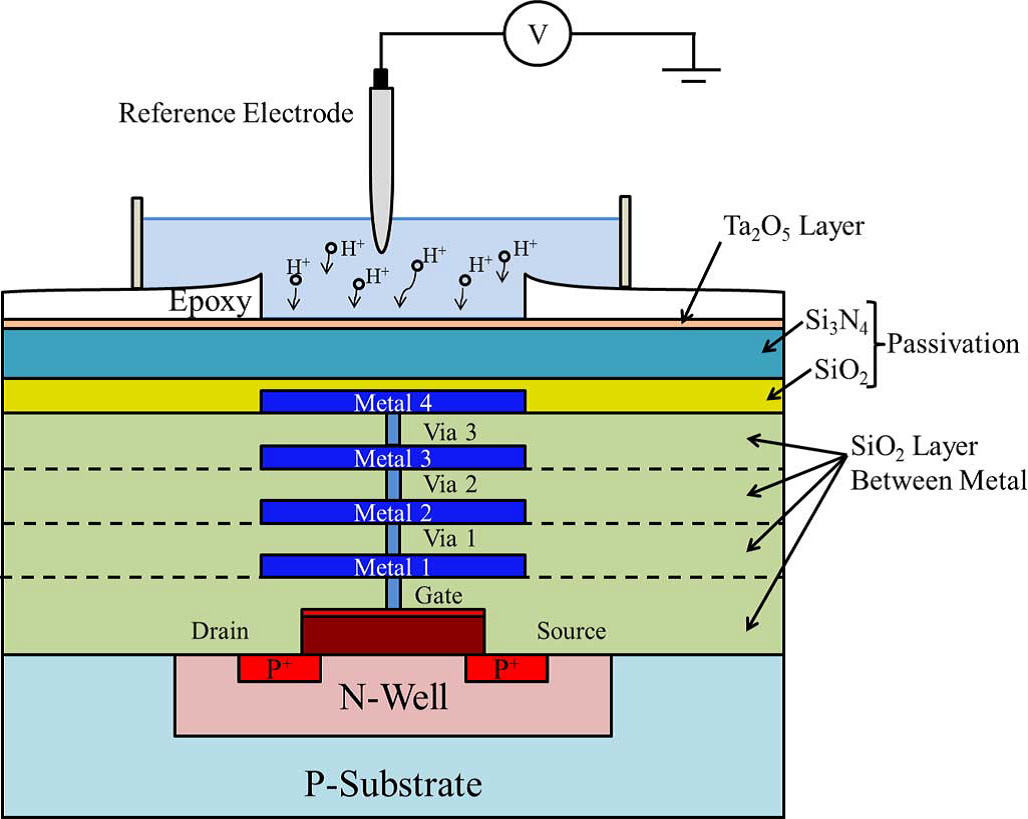 The device was then used to measure glucose concentration through the activity of hexokinase in the range of 0.05 mM - 231 mM, encompassing glucose’s physiological range in blood. The enzyme reaction produces pH change that is proportional to the substrate concentration. The ISFET data we obtained is in good agreement with traditional spectrophotometer data.1

A photodiode is a semiconductor device that converts light into current. The current is generated when photons are absorbed in the photodiode. The platform that we have implemented comprises a complementary metal oxide semiconductor (CMOS)-based photodiode array and an off-the-shelf light emitting diode (LED) with specific wavelength. Reactions that produce colour change can therefore be detected due to the absorption change. The platform that we implemented comprises readily mass-manufacturable components that exploit the colorimetric changes of cholesterol oxidase and cholesterol reaction. The cholesterol concentration in human blood serum as low as 29 μM with a limit of detection at 13 μM has been detected, which is approximately 400 times lower than average physiological range, implying that our device also has the potential to be used for applications that require greater sensitivity. Our quantification results are comparable to that obtained by a bench top spectrophotometer.2 In addition, immunoassay was also performed with the CMOS-based photodiode sensor. Two nanophotonic sensors are introduced here. The one composed of metallic nanostructures (gold circle) is called Nanodisk sensor and the one made of dielectric (silicon nitride) is called grating sensor. The nanodisk sensor has high sensitivity that is attributed to the phenomenon of surface plasmon resonance, which is the oscillation of conduction electrons of the metal triggered by the incident photons having the same momentum at the metal−dielectric interface. The plasmon resonance creates a high intensity electric field at the metal−dielectric interface, which causes a larger resonance shift on binding an analyte to the metal surface. However, one drawback in using plasmonic structures for integration with CMOS detectors for sensing applications is their large line width, which is caused due to inherent high losses associated with metallic structures primarily due to absorption and scattering. While a broad line width is detrimental to achieving a large intensity change due to the wavelength shift, it has an advantage of having a large dynamic range (capability to measure big changes in refractive index before changes in intensity due to wavelength shift saturates). On the other hand, Grating sensor can achieve a very narrow transmission line width (<1 nm), which gives a larger intensity change, but their sensitivity and dynamic range are lower compared to the plasmonic counterparts. Therefore, there is a trade-off in selecting the material platform for nanophotonic structures for integration with CMOS detectors for sensing applications, and it depends mainly on the intended applications.3,4

Like a commercial potentiostat, our electrochemical sensor uses a three electrode systems (working, counter, and reference electrode) for investigations of reaction mechanisms related to redox chemistry and other chemical phenomena. A standard CMOS process was used to fabricate the sensor that makes it cost effective. Moreover the device contains 16 individual electrochemical cells that can work separately and simultaneously.
Different detecting methods can be applied to the device concurrently and different redox chemistries can be analysed simultaneously.

A single-photon avalanche diode (SPAD) (also known as a Geiger-mode avalance photodiode or G-APD) is a solid-state photodetector in which a photon-generated carrier can trigger an avalanche current due to the impact ionization mechanism. This device is able to detect low-intensity signals (down to the single photon). Our SPAD sensor is fabricated by CMOS process and used as an imager for endoscopy.5

These sensors have been proven to have good performance as individual sensors and they can also work quite well together as multiple sensors.

Simultaneous detection of analytes with multiple sensors can be achieved by physical multiplexing.
Physical barriers are placed on the chip to form several compartments. Several different measurements can be undertaken in those separate compartments with the same sensor or different sensors at the same time.

Simultaneous detection of analytes with multiple sensors can be achieved by chemical multiplexing. Those sensors for example ISFET and SPAD sensors, have different working mechanisms, therefore they can work together without interference. Two chemical reactions are carried out in one well on the device and are detected by two kinds of sensors simultaneously. Conditions are optimised to minimise cross-talking.