Giving blood to help others

A large focus of IMID-Bio-UK is on the donation and sharing of samples and data to advance clincial research. We aim to bring together samples and data from a range of immune-mediated inflammatory diseases. However, you do not need to be unwell to donate samples to help others or specifically for research purposes.

For example, in Scotland, the SHARE initiative is a NHS Research Scotland project which is establishing a register of people who want to participate in health research - this includes coded data in their various NHS computer records to check whether they might be suitable for health research studies. UK Biobank is a major national and international health resource, and a registered charity in its own right, with the aim of improving the prevention, diagnosis and treatment of a wide range of serious and life-threatening illnesses – including cancer, heart diseases, stroke, diabetes, arthritis, osteoporosis, eye disorders, depression and forms of dementia. UK Biobank has recruited 500,000 people aged between 40-69 from across the country to take part in their study.

Giving blood is a specific way that a healthy individual can donate samples to help others.  Below our Project Manager, Sancha Martin, writes about the importance of blood donation and her recent trip to the Glasgow Blood Donor Centre.

Did you know that blood is made up of different components?  Giving blood can either result in a donation of red cells, platelets and/or plasma.  This means giving blood can help save or improve the life of up to three different people.

O- is known as the universal donor as anyone can recieve this blood if they need an urgent transfusion, so it's important to that there is a bank of O- readily available. Although group A blood is the second largest blood group in Scotland, type A- blood is relatively rare.  11% of the Scottish population have group B blood, but only 2% have type B-, making it the second rarest blood type in Scotland. Only 3% of Scotland's population have the rarest blood group, AB.  Most are AB+, with Type AB- being the rarest blood type with less than 27,000 people in Scotland with it.

Platelet donations in Scotland are usually given by group A or O type male and existing group A or O type female donors. This is because new female donors need to have a test (which is relatively expensive) to ensure they can donate platelets and as a result they are generally turned away. Conversely, only AB+ type women can donate serum which can used to test, validate and develop pioneering new cellular therapy treatments for a range of diseases.

My blood type is AB+ so I was keen to donate because AB+ patients can only recieve blood from AB+ donors so, selfishly, it's in my own best interests to make sure there is blood available for folks like me.....just in case.

Having moved back to Scotland from England in 2015, I have been very lax in going along to give blood since.  However, a few months ago, I went along to register - but found myself being sent away because, in 2016, the Scottish National Blood Transfusion Service (SNBTS) guidelines were updated to include information about previous malarial risk in countries where malaria has been eradicated or reduced. As I  spent a few years in South Africa as a child, this meant that I had to have a test to check for antibodies to malaria before I could donate.

Negative antibody result recieved, I was cleared to donate! So, whilst on the morning commute a few weeks ago,  I went online and booked my appointment for 9am April 5th.

Breakfast....most important meal of the day apparently, especially when donating blood! Arriving into Central Station in Glasgow, I made my way to the Blood Donor Centre via a well known coffee shop where I picked up a muffin and a fruit smoothie to make sure that I didn't feel light headed after donating.  Greeted on arrival by the very friendly reception staff I was checked me in, and one health check and a small pinprick to check iron levels later, I found myself propped up on the donation seat.

Water....Drinking water beforehand can really make the donation quicker and easier so I was a little worried that my donation might not go to plan - with a 60 minute commute I usually don't drink much in the mornings! After tightening the blood pressure cuff, the nurse felt around for a suitable vein and expertly inserted the needle.  There is a small sting admittedly but, in the scheme of things, its not too bad.  Inititally it looked like my body was going to be selfish and keep my blood to itself, but a wiggle of the fingers sorted that, and the blood bag filled rapidly - surprising the nurse who had not expected to get the full pint out of me due to the lack of water this morning! After removing the needle and applying a plaster, I got to sit still for a few minutes before heading for my reward!

After donation, there is a plethora of biscuits and drinks on offer as a thank you - and to perk you back up if needed. What better excuse for me to have a Tunnocks Teacake at 9.30am on a Friday morning than helping up to three people with health challenges today! Two cups of juice later and I am back on the street, heading to the underground to arrive in the office before 10am.   The blood I have donated will be on its way to the local laboratory where it is going to be split into red cells, platelets and plasma. It will be tested for a range of things to ensure it is definitely safe to give to people who are ill. There are 39 blood banks across Scotland and  my blood will go to one where it will be refrigerated until it is needed. Blood can be used anytime upto 35 days after donations but platelets can only be used for up to seven days.   Fresh frozen plasma can be kept for up to three years. 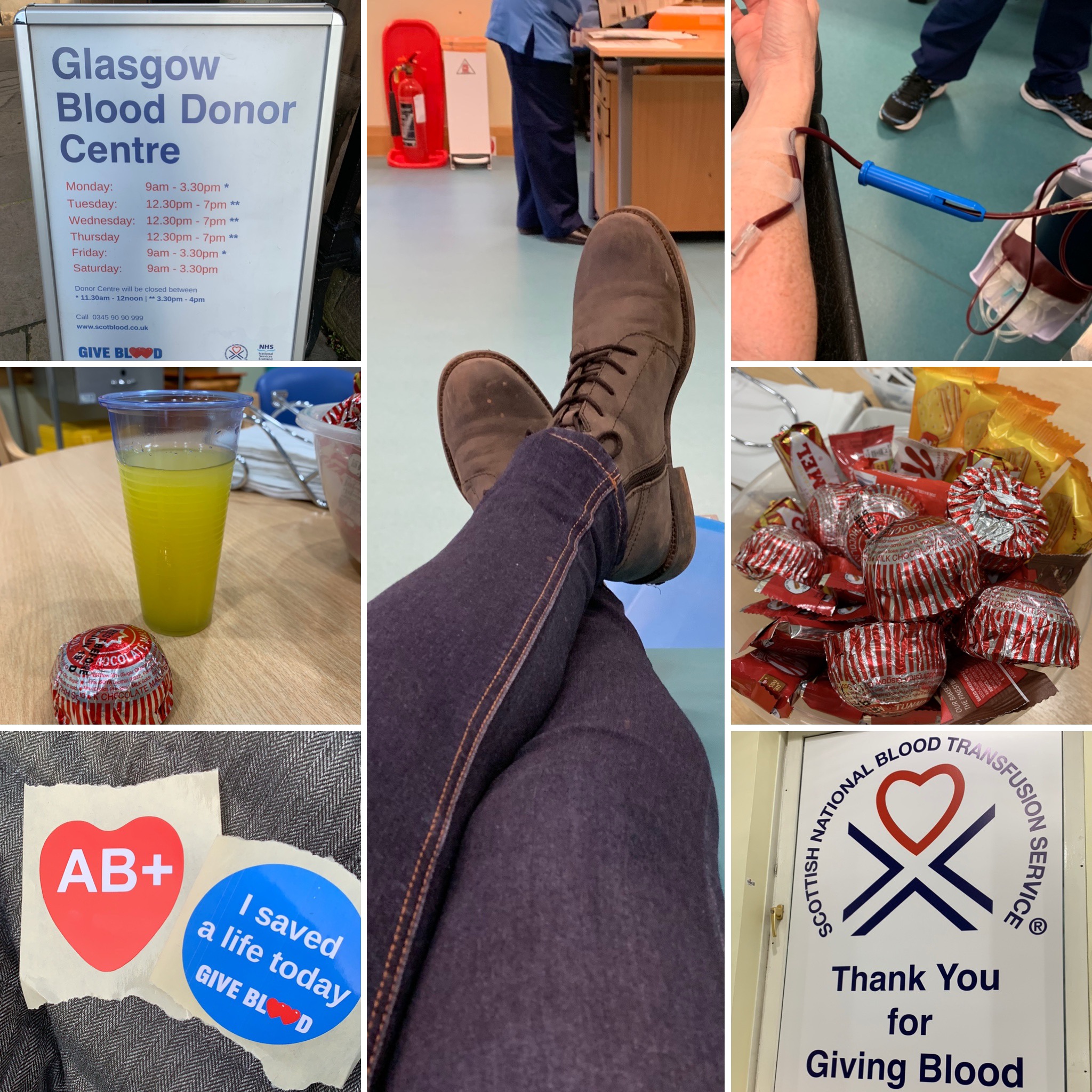 Blood donations may also be used in research.  Partial donations, for example where a full pint hasn't been given or the donation hasn't been kept at the right temperature, can be used for non-clinical purposes. These can include:

Donating your blood is a simple and easy way to help others.  Why not think about signing up and/or sheduling your next appointment sooner rather than later?

To find out more about blood donation, click on any of the links below: