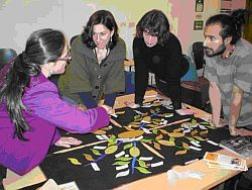 Ketso, an idea that had its roots in the mountains of Lesotho will be used in Scotland for a policy-orientated event at the Economic and Social Research Council (ESRC) Festival of Social Science on November 9.

The event will explore migration using Ketso, which means action in Lesotho.  Inspired by working with communities in Southern Africa and North England, academic and entrepreneur Dr. Joanne Tippett of The University of Manchester developed Ketso, a tactile and hands-on ‘workshop in a bag’.  This University of Manchester social business is the first spin-off from ESRC funded research and is starting to change the face of community consultation across the globe.

The event will bring together policy makers, local authorities and refugees and asylum seekers, and is organised by the Glasgow Refugee and Migration Network (GRAMNet) and Convention of Scottish Local Authorities Strategic Migration Partnership (CSMP).

GRAMNet co-directors Professor Rebecca Kay and Professor Alison Phipps OBE have been using Ketso to engage with refugees and asylum seekers in Scotland for almost two years. Based on the success of this work, they have incorporated Ketso into community-based research into poverty reduction in Russia and work with Universities on the West Bank and Gaza to develop lifelong learning in Palestine. 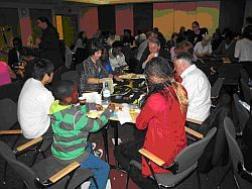 Ketso is a hands-on kit for creative engagement, with re-usable, colourful shapes (leaves and branches) for capturing people’s ideas. Everyone has a voice, as it is easy to add ideas to the picture of the group’s thinking.  This is particularly suited to working with vulnerable people.  Professor Phipps said, “What struck me was a comment from a refugee, that most research methods make vulnerable people feel like they are in a deportation interview, but with Ketso people feel they can genuinely explore ideas together."

Professor Kay said: “I wanted to make sure that this workshop included everyone’s voice, including those affected by current policy and practice.  Ketso is ideal for not only making sure everyone is heard, but also allowing participants to learn from each other. They can develop new ways of thinking through using the kit”.

Dr. Tippett said: “Sometimes research seems to just suck information from people.  I wanted Ketso to change this balance of power, and the feedback from researchers and participants has been great.  People are actively participating during focus groups, forging new connections, and developing ideas that are of use to them.  As a result, researchers gather better data. Ketso creates a collaborative environment where both researchers and participants benefit.”

Ketso has now been used in research all over the world – from perceptions of water quality in Peru, to looking at environmental management and climate change adaptation in six cities in Africa, across Europe looking at resilience and flood management, and in the UK, from exploring sustainability skills in the workplace with the Sustainable Consumption Institute, to research with feminist rock festival organisers.

Prof. Colin Hughes, the Vice President for Sustainability at The University of Manchester said: “It is great to see Ketso leading the way in not only engaging with serious scholarly questions, but also helping make a real difference on the ground”.

About ESRC Festival of Social Science

The Festival of Social Science is run by the Economic and Social Research Council and takes place from 3-10 November 2012.  With events from some of the country's leading social scientists, the Festival celebrates the very best of British social science research and how it influences our social, economic and political lives - both now and in the future.  This year’s Festival of Social Science has over 180 creative and exciting events across the UK to encourage businesses, charities, government agencies, schools and college students to discuss, discover and debate topical social science issues.  Press releases detailing some of the varied events and a full list of the programme are available at the Festival website.  You can now follow updates from the Festival on twitter using #esrcfestival. 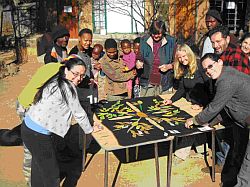 Ketso is a hands-on kit for engagement.  It was launched as a social business in 2009, selling a toolkit of the same name, with supporting learning resources.  Ketso is a ‘workshop in a bag’; participants write their ideas on re-usable, coloured shapes and place them on a felt workspace to build a picture of the group’s thinking.  Icons are used to prioritise ideas and a grid workspace is used to organise ideas into an action plan.  Ketso is used in workshop facilitation, community and stakeholder engagement, skills training and research.  Ketso is now being used in research and teaching in over half of the UK’s universities.  It has been used in contexts ranging from health and wellbeing, to community development, to environmental planning to enterprise development.

Whereas traditional research tools tend to be formal and dry, Ketso is colourful and tactile, helping to encourage dialogue and capture a large amount of data in a surprisingly short space of time.  Ketso helps researchers to engage with stakeholders and participants at every stage of research, from formulating research questions, to gathering data, to analysis, to applying the results.  www.ketso.com

Dr. Tippett is a Lecturer in Spatial Planning at The University of Manchester.  Her research covers community engagement, ecological planning and sustainability skills.  She is also an entrepreneur (as well as a new mum to seven month old Iris), having started Ketso as a spin-off from ESRC funded research.  Originally inspired by working with villagers in Southern Africa, Dr. Tippett developed this new approach for community engagement, in part because she found that women didn’t tend to speak in mixed gender groups.  She wanted to make sure that their ideas were central in planning for the future of their villages.  Back in the UK, Dr. Tippett’s ESRC funded research into ecological planning led to the transformation of a former landfill in Manchester into a country park.  During this research, Ketso was developed from strips of paper made on a table in Africa to the colourful kit in use today.