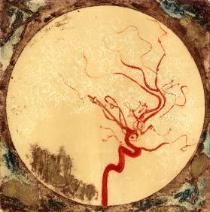 The John Templeton Foundation through the New Directions in the Study of Mind Project, University of Cambridge.

A common-sense view is that when we perceive physical objects—tables and chairs—we simply become aware of those things and their properties. We become aware of a table and its squareness, a chair and its brownness. However, illusions and hallucinations have led some philosophers to doubt this. In illusion you misperceive an object. For example, you might perceive a table but experience it to be round when it is actually square. Or you might experience a chair as being red when it is really brown. In hallucination it seems to you as if you are perceiving an object, but you are not. For example, you might hallucinate that there is a table in front of you, when there is not.

Sense-data theory is rejected by many philosophers because it posits mental entities—entities that are usually taken to be non-physical. Such a view contradicts physicalism, understood as the view that everything about the mind can be explained in terms of broadly physical entities. However, we believe that this is not sufficient motivation to abandon sense-data theory. One reason is that it is not evident that physicalism is true. We shouldn’t reject sense-data theory if it turns out to be a good theory of perceptual experience, given that good theories of it are hard to find, but consider questioning physicalism instead.

Moreover, it has not been demonstrated that sense-data theory is incompatible with physicalism. That an entity is mental does not alone entail that it is not also physical. If the mind is dependent on the brain, and the brain is physical, then might not sense-data be physical too? One main aim of this project is to understand the metaphysical commitments of sense-data theory utilising recent developments in metaphysics about what dependence and fundamentality are.

We will also investigate whether sense-data theory gives a good account of all illusions and hallucinations. One reason to think that it does not is the alleged existence of illusions where subjects experience objects with contradictory properties (such as moving yet not changing position). If sense-data are as they appear to be, then such illusions or hallucinations imply the existence of impossible objects. But surely impossible objects cannot exist—that’s why they are impossible! We take this to be a serious challenge to sense-data theory.

Our explorations will lead us to examine the ways properties such as space, time and motion are represented in our experience, drawing on the latest scientific results about illusions and hallucinations, and on philosophical reflection on the structure of experience. We will study the sense-data theory focusing on (1) whether it is phenomenologically adequate and (2) what exactly the metaphysical commitments of the theory are. We will do this by investigating the nature of experience with respect to perception of space, time and motion, and by exploiting recent advancements in metaphysics.

Statement of the Problem

The problem of perception is the problem of giving an account of the nature of perceptual experience, which appears to put us in touch with objects and properties, while accounting for the possibility of illusory and hallucinatory experience. One potential solution, albeit not popular of late, is to posit the existence of sense-data: immediate objects of perception that have the properties that they appear to have. Sense-data theorists think that this is a solution because they claim that every time one seems to perceive objects with certain qualities, there really are objects with those qualities that one perceives.

While some variants of this view are that sense-data could turn out to be, or indeed are, physical mind-independent objects around us, such as apples or their surfaces (Moore 1953; Bermudez 2000), the main variant is that sense-data are non-physical objects. It is this variant that we will investigate and refer to as “the sense-data theory.”

Many have found the sense-data theory implausible due to the alleged non-physical nature of sense-data. It is thought that the existence of such entities are in contradiction with physicalism and naturalism, hence we should find other solutions to the problem of perception. However, in line with the aims of the New Directions in the Study of Mind project we do not wish to dismiss sense-data theory on this ground. Sense-data theory may indeed turn out to be false, but its rejection shouldn’t rest on physicalist assumptions. We believe that such are the problems that all theories of perception face, that if a good theory can be found that is non-physicalist, then its success should serve as an argument for non-physical entities.

We will study sense-data theory from two perspectives:

(a) Experiences as of an object moving yet not changing position, as said by some to be experienced in the waterfall illusion. (See, e.g., Wohlgemuth 1911.)

(b) Experiences of two objects that appear to have different colours but which, when moved together, appear to have the same colour yet neither appears to change colour. (E.g. the two marked squares in Adelson’s checker-shadow illusion.)

(c) Experiences of two gratings, one above the other, formed by the same number of black lines. The lines in one grid appear to be different in width by around 20%–30% compared to the other, yet each grid seems to span the same width of space (Blakemore and Sutton 1969).

These are alleged cases of experiences where objects seem to have properties that are contradictory. Can positing sense-data explain these cases? It would seem, prima facie, not, for objects with contradictory properties cannot exist: they are impossible. If the sense-data theory commits us to the existence of impossible entities, then that might be a more conclusive objection against it compared to the objections that are raised from the alleged truth of physicalism.

How can the sense-data theorist respond to this, and other challenges to its phenomenological adequacy (such as the challenge from the Speckled Hen (Chisholm 1942) and the alleged paradox of the Non-Transitivity of the 'Exact Similarity' Relation (Armstrong 1968))? We will investigate this question from a philosophical perspective by considering how space, time, and motion appear in our experiences. It is an interesting question as to what experiences of impossibilities really are. For example, whether the waterfall illusion involves an experience of something moving yet not changing position is controversial. In addition to philosophically studying these issues, we will also consult our project affiliates from Psychology, who will regularly attend our project meetings and events. Thanks to such participation, we will also consider, for future research, whether these questions can be in part studied empirically, and if so, what experimental paradigms can be developed to do so.

This part of the project draws on Macpherson’s background in philosophy of perception and her work on sense-data (2014) and the structure of experience (2015). It also draws on the close working relationships that she has established with psychologists, and her experience of running interdisciplinary projects.

Sense-data theories are challenged by physicalist and reductionist philosophers because they posit non-physical entities. But in what sense are sense-data non-physical? Can recent developments in metaphysics illuminate their nature? Moreover, what does the possibility of sense-data tell us about recent metaphysical theories of dependence, fundamentality, realization, and emergence—notions that are often invoked in trying to solve the mind-body problem?

Further, many definitions of physicalism—non-modal ones—define it in terms of properties, not objects (Stoljar 2015). Putative examples of non-physical objects, such as sense-data, cast doubt on these characterizations of physicalism suggesting that they only give a necessary and not sufficient condition for physicalism.

Another metaphysical question concerns the notion of emergence. Emergentism about the mind is the view that although all mental properties depend on physical properties, some mental properties are “over and above” physical properties. A common understanding of strong emergence is that an entity is strongly emergent if and only if it is dependent and fundamental. This formulation renders sense-data emergent: a sense-datum is a mind-dependent object, and it is arguably fundamental. On the one hand, it seems highly implausible to take sense-data to be emergent entities. In that case we need to show where the problem lies. Is this understanding of strong emergence inadequate? Or is mind-dependence not the type of dependence that is relevant to emergence? Or does the notion of fundamentality need to be spelled out so exclude sense-data? On the other hand, perhaps we should think of sense-data as emergent entities—emerging from mental states. If one holds that mental states are physical states, then a new account of sense-data looms into view and should be explored. Either way, a fresh look at the metaphysics of sense-data will reveal interesting results about some of the most topical notions in metaphysics, such as dependence and fundamentality.

This part of the project will be carried out by the Philosophy Postdoc, Umut Baysan, with input from Stephan Leuenberger and Fiona Macpherson. The three have worked well together previously on the Glasgow Emergence Project funded by the Templeton Foundation.

Core project members will meet fortnightly, together with selected faculty and graduate students at Glasgow’s Centre for the Study of Perceptual Experience (CSPE). We will discuss our developing work and the extant literature. Affiliates will join when available.

The Sense-Data Workshop (27-28 April 2017) will bring together philosophers of perception, metaphysicians, and psychologists to debate the prospects of the sense-data theory of perception: whether it can account for the phenomenology of experience, what its ontological commitments really are, and how it meshes with contemporary science.

(Talk titles will be updated closer to the workshop date.)

The workshop is free to attend, but registration via email is required (for space and catering related reasons). Please send an email to Umut Baysan (emin.baysan@glasgow.ac.uk) by Monday 24 April if you would like to attend.

The workshop is funded by the John Templeton Foundation (via the New Directions in the Study of Mind Project at the University of Cambridge) and the Scots Philosophical Association.