Further Details of the Aims of the Conference 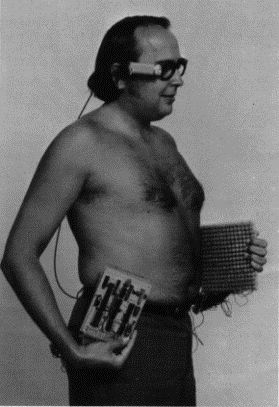 The conference is on the topic of sensory substitution and augmentation. In sensory substitution, one sense is used to try to replace another; in sensory augmentation, one sense is used to try to create a new sense or enhance an existing one. The most famous instance of sensory substitution is tactile-vision sensory substitution, pioneered by the late Paul Bach-y-Rita. This involves stimulating the skin in a pattern determined by input from a camera focused on the area in front of the subject. After some practice with the equipment subjects became able to identify three-dimensional objects at a distance from their body. They described the experiences that they were having as being as of objects in front of their body in space, rather than as stimulation on their skin – and described having experiences most resembling ordinary visual experiences. Since that time, several other sensory substitution and augmentation devices have been built, including the “vOICe” system that aims to substitute sight with hearing, the “feelSpace” belt that tries to give users a magnetic sense using touch, and replacement of touch in prosthetic limbs by using touch on other parts of the body.

The empirical research has now reached the point where different forms and versions of substitution devices have been produced, users have been trained to use them, and interesting behavioural and brain imaging studies are beginning to be conducted that shed light on what is going on in subjects using the substitution and augmentation technologies. In addition, the topics of cross-modal interactions and the nature of the senses have become an area of intense research in both psychology and philosophy. The time is ripe to put together experts in these fields with the hope that new and substantial leaps forward in knowledge can be made.

Empirical researchers are trying to develop the best and most useful substitution systems, and to investigate the principles behind their development. They are also studying the changes in the brain that take place during use. This research raises a large number of interesting questions for philosophers, psychologists and designers interested in the nature of perception:

One aim of the conference is to enable the designers of this equipment to share good practice. Another aim is to inform the design of future devices by the more theoretic considerations about the nature of perception that the conference participants will consider. This research will involve knowledge exchange among academics and those designing devices to help those who are sensorily impaired who require prosthesis. The designers already work with the sensorily impaired users, and will share their knowledge of people’s reaction and interaction with such devices to date. The more theoretical research will feed back down into the new design of devices and equipment and we will suggest new experiments and tests to further our knowledge of users’ interaction with the equipment. A third, and most important, aim is to make progress in considering the nature of the perception and the nature of the senses.