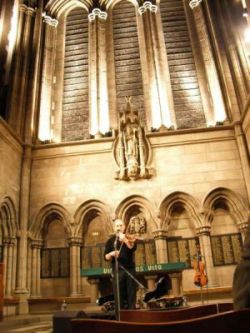 The Tenth Annual Gordon Lecture in American Studies was held in the University’s Memorial Chapel on 27th January 2010. Rather than a traditional lecture, this was a musical performance by Mr. Bruce Molsky, a leading American traditional and folk musician and singer.

The lecture series commemorates the endowment for American Studies postgraduate students created by Mr. Albert Gordon, an Honorary fellow of the University. Mr. Gordon died on 1st May 2009 at the age of 107, and Mr. Molsky’s performance constituted a worthy tribute to the late Mr. Gordon.

Almost two hundred people filled the chapel to hear an exciting performance of Appalachian and traditional American songs and tunes, which Mr. Molsky both sang and performed on the fiddle, the banjo and the guitar. Mr. Molsky has released six solo cds and numerous collaborative works such as Fiddlers Four and Moziak; he has twice been nominated for Grammys and his Poor Man’s Troubles won the Best Traditional Folk Award from the Association for Independent Music.