An international team of researchers has developed a new method of overcoming a key challenge for the development of future quantum tech.

In a new paper published in the journal Physical Review X Quantum, the researchers describe how they may have solved a key problem for quantum technologies by keeping particles entangled in previously impossible conditions.

Their findings could help advance the development of new quantum-enhanced imaging and communications technologies. 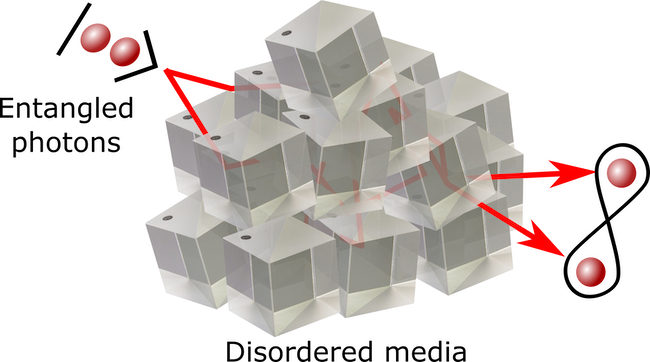 Quantum entanglement is a fascinating property of quantum mechanics which allows two particles to maintain a close connection, regardless of the distance between them.

However, entanglement is a fragile and difficult-to-detect property, which can make it challenging to use reliably in real-world conditions.

When pairs of entangled photons – the particles of light – propagate through cloudy or opaque materials like biological tissues, or through swirling gases, entanglement can deteriorate and be rendered useless.

The researchers, from the University of Glasgow in the UK and the Kastler Brossel lab and the Paris Institute of Nanosciences in France, have developed an optical manipulation technique to preserve entanglement between photons travelling through challenging conditions.

To demonstrate their technique, they built an experiment in which pairs of entangled photons were sent through a scattering layer. Usually, this causes the photons to be randomly scattered in all directions, and entanglement becomes undetectable.
Surprisingly, by acting on the particles before they enter the scattering layer, the researchers were able to compensate for the disturbance they experience during their propagation and restore entanglement at the output.

Dr Hugo Defienne of the Paris Institute of Nanosciences and the University of Glasgow is the paper’s corresponding author. Dr Defienne said: “Pre-mixing the photons before they pass through the scattering material allows us to restore entanglement at the other side. It’s a little bit like turning omelettes back into eggs, and it’s the first time that it’s been done in quantum technologies.

“The system we’ve developed has the potential to make quantum entanglement much more robust in real-world environments by preserving entanglement in challenging situations. That could help advance new applications in quantum microscopy, where entangled photons could resolve higher-resolution images of tissue samples, or in communications, where messages could be more reliably encrypted and transmitted.

“The success of our research is a result of the combined expertise of a team with expertise in very distinct fields of optics. In Paris, Professor Sylvain Gigan’s experience in manipulating photons using lightwave shaping techniques was complemented by the quantum imaging methods and the single-photon cameras I developed in partnership with Professor Daniele Faccio at the University of Glasgow.

“We’re looking forward to building on this work to develop further applications in the future.”

The team’s paper, titled ‘Manipulation and certification of high-dimensional entanglement through a scattering medium’, is published in Physical Review X Quantum.