A sophisticated new observation of a cool zone on the surface of the sun could help scientists develop a new kind of solar thermometer.

A team of astrophysicists led by researchers from the University of Glasgow are the first to use observations from the ALMA observatory in Chile to estimate the temperature of a solar prominence.

Solar prominences are zones of plasma on the surface of the sun which are contained by its powerful magnetic fields at a temperature much lower than neighbouring areas.

While areas of the sun can exceed a million degrees Kelvin, the centres of solar prominences are usually between 5,000 and 8,000 degrees. They can last for weeks before becoming unstable and erupting outwards into space.

In a paper published in the journal Monthly Notices of the Royal Astronomical Society: Letters, the researchers outline how they harnessed the ALMA observatory’s ability to generate high-resolution images of the sun using data collected from across its array of radio antennas.

This process, known as interferometry, allowed them to make a detailed examination of the temperature of a solar prominence which occurred on 19 April 2018. They examined data from the H-alpha and 3mm regions of the electromagnetic spectrum, allowing them to measure the optical thickness and brightness temperature of the prominence over the course of around two hours.

Those observations allowed them to generate images of the prominence’s spine, outlining barb-like structures on the edges of its plasma sheath. Analysis of its brightness suggested that the temperature of the plasma contained in the spine was between 6,000 and 7,000 degrees Kelvin.

The prominence was also measured by two other observatories, one on Earth and one in space. The Białkow Observatory at the University of Wrocław in Poland took measurements of the prominence at the same time, as did the Atmospheric Imaging Assembly on board NASA’s Solar Dynamics Observatory mission. The team correlated the observation data from both with the ALMA results and found a high degree of agreement, suggesting that the ALMA results were reliable as an estimate of the shape and temperature of the prominence.

Dr Nicolas Labrosse of the University of Glasgow School of Physics and Astronomy is the paper’s lead author. Dr Labrosse said: “Solar prominences are one of the most striking illustrations of how magnetic fields shape the atmosphere of our sun, creating and controlling structures of much cooler plasma in an almost unimaginably hot environment.

“Understanding how solar prominences form and evolve over time will help us answer a number of fundamental questions about how our sun works, along with others like it across the universe. Unlocking those answers could also help us better understand how to use magnetic fields to control plasma here on Earth, in environments like future fusion reactors.”

“We’re very pleased to have been able to demonstrate for the first time that we can take high-resolution measurements of solar prominences using interferometry data from ALMA. While we used only two of the bandwidths available from ALMA on this occasion, expanding our observations across other bands will allow us to make even more detailed observations, which could take us one step closer to developing a better kind of solar thermometer.” 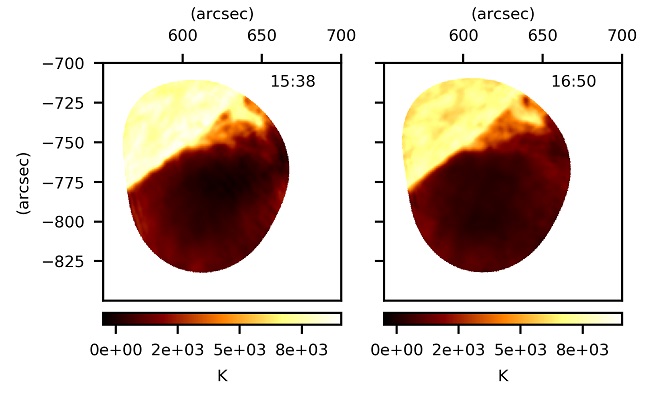 Dr Labrosse is a co-author of a second research paper led by astrophysicists from the Czech Academy of Sciences, published in the Astrophysical Journal, which also examines solar prominence data from ALMA.

Dr Labrosse added: “These two papers were written independently of each other but show complementary results on how we can use ALMA to measure the temperature of solar prominences.

“The second paper shows that there are still unresolved structures in our ALMA data - prominence threads which have a characteristic spatial scale smaller than the resolution of ALMA. This is interesting because we may learn more from this about how prominences are formed and how the building blocks of prominences are related to what we observe with our instruments at the current resolution.

“Taken together, the results of these papers suggest that there is a great deal that we can learn from ALMA data about solar prominences. We’re looking forward to working with our research partners in the future to take further measurements with ALMA.”

The team’s paper, titled ‘First High Resolution Interferometric Observation of a Solar Prominence With ALMA’, is published in Monthly Notices of the Royal Astronomical Society: Letters. The research was supported by funding from the Science and Technology Facilities Council (STFC).