A robot which encourages children to wash their hands is helping Glasgow primary school pupils do their part to prevent the spread of COVID-19.

WallBo, a ‘social robot’ with a friendly smile and a Scottish accent, developed by researchers at the University of Glasgow, has helped boost hand hygiene awareness in two local primary schools.

P3 pupils at Saint Bride’s Primary in Govanhill and P4 pupils in Broomhill Primary in the city’s west end have been visited by WallBo. Wallbo’s encouragement has helped the pupils wash their hands more regularly and more effectively.

WallBo is a portable robot which takes the form of a large green hand, which the designers chose to remind pupils of their own hands. It has two motorised ‘eyes’ and an animated video screen ‘mouth’ installed in its palm.

In both classrooms, WallBo was placed by the sink where pupils wash their hands during the day. As children approached the sink, WallBo offered advice on effective handwashing in the form of stories, songs and the handwashing steps, all delivered in a Scottish accent. The developers set out to make WallBo as relatable as possible to pupils, aiming to make it seem as like a helpful friend.

The pupils in both schools actively engaged with WallBo, and joined in with its catchy handwashing song while washing their own hands. Follow-up questions with pupils showed that the majority of them were keen to see WallBo return to their classrooms. Pupils reported that they thought WallBo helped them remember to wash their hands and keep germs at bay.

Overall, Wallbo’s time in the schools resulted in an 85% increase in pupils’ handwashing compliance and a 35% improvement on pupils’ knowledge about hand hygiene compared to their answers before the robot was installed. The researchers also found that pupils were all better-informed about the importance of hand hygiene in preventing spread of diseases.

WallBo (previously called Pepe) was first tested in 2019 at a school in a small village in Kerala, India, in partnership with researchers from Amrita University. The research team found that handwashing rates there were boosted by 40%, and that children spent twice as long washing their hands after WallBo was installed. 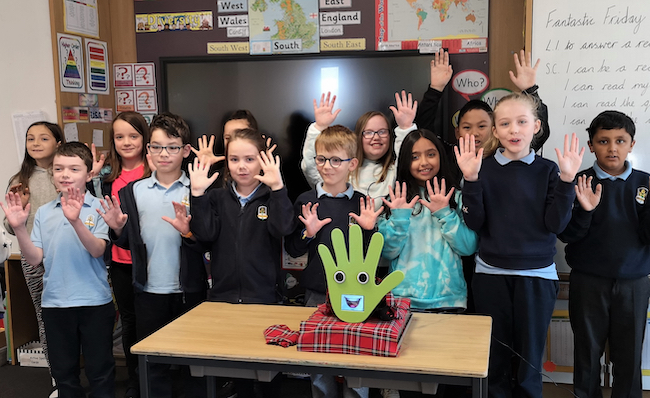 Dr Amol Deshmukh from the University of Glasgow’s Institute of Neuroscience and Psychology led the development of WallBo. Dr Deshmukh said: “We’re delighted that WallBo has been so warmly welcomed at Saint Bride’s and Broomhill primaries and that the kids have been keen to engage in more effective handwashing as a result.

“WallBo was originally developed to help reduce levels of child mortality in India, where transmissible diseases like diarrhoea and respiratory infections kill as many as 320 children a day. Good hand hygiene can help prevent the spread of those diseases and save young peoples’ lives.

“The results we saw in our tests there were very encouraging, and once the COVID-19 pandemic began we started to consider the positive impact WallBo could have in preventing transmission in children by encouraging improved hand hygiene.

“We approached Glasgow City Council to discuss the possibility of trialling WallBo in primary schools, and we’ve developed a great working relationship which is clearly delivering good results.  We are working towards developing WallBo as a product which can be made available to schools to encourage children to wash their hands more effectively around the world, and prevent the spread of all kinds of transmissible diseases.

“Although the first tests were conducted with a human controlling WallBo, we are now working towards making the robot completely autonomous. We are also seeking funding to support designing WallBo as a product.”

Louise Kerr, headteacher of St Bride’s Primary, said: “We were delighted to trial this really exciting initiative and the children were fully engaged and very enthusiastic to take part.

“Importantly, hand washing techniques are now much more effective in school with children spending more time ensuring that they follow all the steps.  I can honestly say that the children have maintained the improved hand washing regime and still sing the wee song which is lovely to witness.

“It was also great to get feedback and data from Dr Deshmukh on the improvements that took place over the few days of the trial and we will continue to encourage all pupils to maintain the handwashing techniques to help stop the spread of germs.”