For the first time, scientists have picked up the ripples in space-time caused by the death spiral of a neutron star and a black hole.

University of Glasgow researchers played a key role in the international collaboration that made the detection possible. They contributed to the design of the detectors – the most sensitive scientific instruments ever built – and the advanced data analysis needed to provide an astrophysical interpretation of the signals.

Gravitational waves are produced when celestial objects collide and the ensuing energy creates ripples in the fabric of space-time which carry all the way to the detectors we have here on Earth.

On 5 January 2020, the Advanced LIGO detector in Louisiana in the US and the Advanced Virgo detector in Italy, observed gravitational waves from this entirely new type of astronomical system.

LIGO and Virgo picked up the final throes of the death spiral between a neutron star and a black hole as they circled ever closer and merged together. They named the signal GW200105.

Remarkably, just days later, a second signal was picked up by Virgo and both ALIGO detectors – in Louisiana and Washington state – again coming from the final orbits and smashing together of another neutron star and black hole pair. This signal was named GW200115. 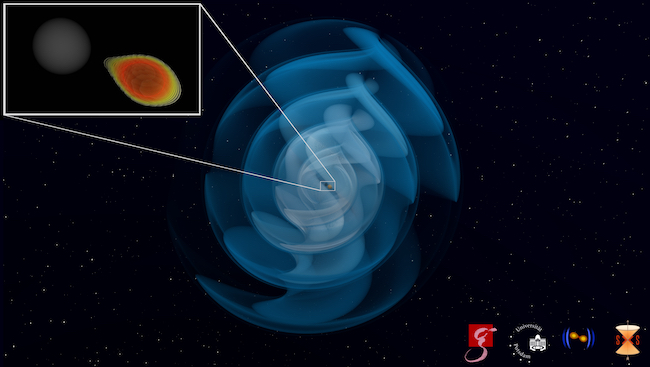 The previously announced GW190814 might correspond to such a binary, but the unexpected mass of the lighter component is more likely a black hole than a neutron star. The candidate signal GW190426_152155 could be a neutron star–black hole, but is sufficiently quiet that it is not clearly distinguishable from noise. The new signals are more confident detections, and clearer observations of neutron star–black hole binaries.

Dr Christopher Berry, of the University’s School of Physics and Astronomy and the Center for Interdisciplinary Exploration and Research in Astrophysics, Northwestern University, said: “The detection of neutron star–black hole binaries represents the culmination of many decades of work developing gravitational-wave detectors. Thanks to their improvements in our instruments, we are able to detect signals from ever greater distances, boosting our detection rate.

“As we build a larger catalogue of gravitational-wave signals, we start to uncover a greater variety of sources. This diversity provides us with an unprecedented insight into the properties of black holes and neutron stars.

“Using measurements of the masses, spins and the rate of mergers, we can dig into the details of how massive stars evolve. Understanding how binary star systems work is one of the most important questions in astronomy. Fitting all the information from gravitational-wave observations will allow us to pin down the details of binary evolution. In the coming years, future observing runs will provide hundreds of detections, enabling precision measurements of how massive stars live their lives.”

Professor Sheila Rowan, director of the University of Glasgow’s Institute for Gravitational Research, said: “We’ve made a remarkable amount of progress since the historic first detection of gravitational waves in 2015, initiating the age of gravitational wave astronomy. This first detection of the collision of a neutron star and a black hole demonstrates that we have many new discoveries to look forward to, as well as new signals that will help deepen our understanding of the universe.

“Between now and summer next year, the LIGO detectors are set to be upgraded again, using what we’ve learned over previous observing runs to make them even more sensitive to the vibrations of spacetime. We’re looking forward to what we can learn from future detections."

For decades, astronomers have predicted and theorised that this type of system – a black hole and neutron star merger – could exist, but without any convincing observational evidence.

Now gravitational wave scientists have finally witnessed the existence of this system they can start to shed more light on the birth, life and death of stars, as well how they form.

Dr Berry added: “While the masses of GW200105 and GW200115's sources match our expectations for neutron star–black hole binaries, GW200115 has an interesting spin measurement. The spin of its black hole is most probably misaligned with the orbital angular moment. This type of misalignment is not typically expected, and could hint at something about how the system formed.

“Perhaps the binary formed dynamically in a dense environment like a globular cluster when a black hole and a neutron star strayed close together, rather than forming from two stars that lived their lives together? Or perhaps this is showing how supernova explosions can misalign black hole spins? Or perhaps this is a fluke measurement, and spins are typically aligned? Future observations of neutron star–black hole binaries will let us tease these possibilities apart.”

The UK’s contribution to the collaborations is funded by the Science and Technology Facilities Council. The LIGO scientific collaboration comprises over 1,300 scientists from 18 countries, and includes researchers from 11 UK universities.

LIGO is funded by the National Science Foundation (NSF) and operated by Caltech and MIT, which conceived of LIGO and lead the project. Financial support for the Advanced LIGO project was led by the NSF with Germany (Max Planck Society), the U.K. (Science and Technology Facilities Council) and Australia (Australian Research Council-OzGrav) making significant commitments and contributions to the project. Approximately 1,400 scientists from around the world participate in the effort through the LIGO Scientific Collaboration, which includes the GEO Collaboration.

The Virgo Collaboration is currently composed of approximately 650 members from 119 institutions in 14 different countries including Belgium, France, Germany, Hungary, Italy, the Netherlands, Poland and Spain. The European Gravitational Observatory (EGO) hosts the Virgo detector near Pisa in Italy and is funded by Centre National de la Recherche Scientifique (CNRS) in France, the Istituto Nazionale di Fisica Nucleare (INFN) in Italy and Nikhef in the Netherlands.

Operating underground, KAGRA is a laser interferometer with three-kilometer arm-length in Kamioka, Gifu, Japan. The observatory is hosted by the Institute of Cosmic Ray Researches at the University of Tokyo, and the project is co-hosted by National Astronomical Observatory in Japan and the High Energy Accelerator Research Organization. After its construction in 2019, KAGRA  joined the international gravitational wave network of LIGO and Virgo. It started collecting data in the final stage of O3b, February 2020. KAGRA Scientific Congress is comprises more than 460 members from 115 institutes in 14 countries/regions.