The most powerful new particle accelerator could be a muon collider

Particle accelerators have many practical applications, from fundamental discoveries such as the Higgs boson at the Large Hadron Collider (LHC), to determining the structure of drugs and advanced materials, to the treatment of cancer.

The LHC at CERN is the world’s most powerful accelerator, but the main question is, what should be the next accelerator to replace the LHC at the highest possible energies once it ceases operation? 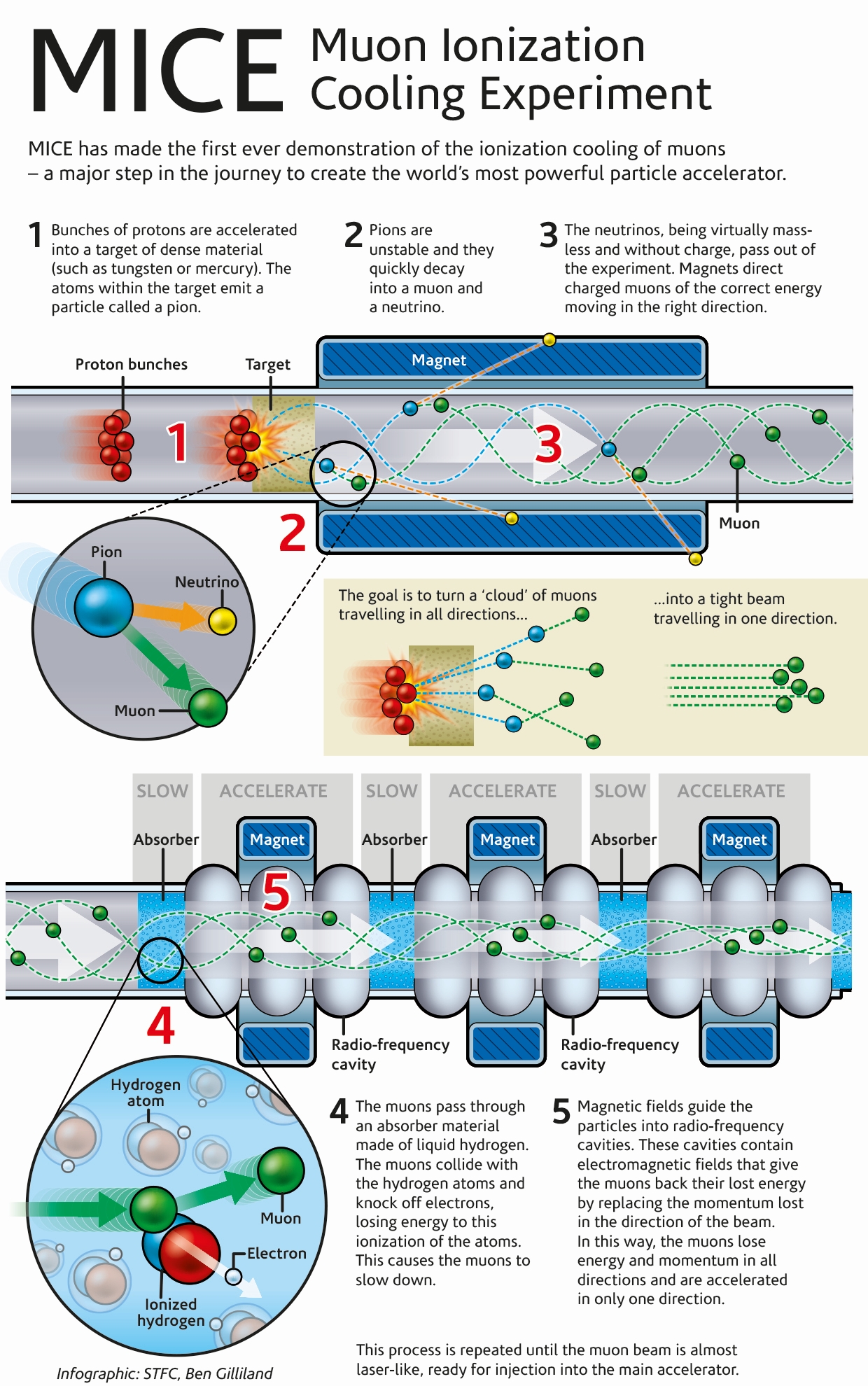 A muon collider could be the answer. As the world's most powerful accelerator, it would help scientists understand the fundamental constituents of matter at energies not currently accessible by the LHC - and at a lower cost than other alternatives.

In a breakthrough paper, published in Nature today, researchers describe how the main stumbling block for the realisation of a muon collider was overcome. For the first time, scientists working at the muon beam-line at the Science and Technology Facilities Council (STFC) ISIS Neutron and Muon Beam facility on the Harwell Campus in the UK, have observed ionization cooling.

The international Muon Ionization Cooling Experiment (MICE) collaboration, who carried out the research, consists of many scientists from around the world, including a team from the University of Glasgow led by Professor Paul Soler, who is also the UK Principal Investigator on the project.

The LHC accelerates protons, which are composite particles consisting of quarks and gluons, up to very high energies. The energy carried by each of the constituents is less than the total energy of the proton. Muons are fundamental particles, much like the electron but 207 times more massive, so the total effective energy carried by the muons in a muon accelerator can be used to create new particles in the muon collisions.  A muon collider could then replace the Large Hadron Collider (LHC) and create a ten-fold increase in effective energy for the creation of new particles.

Muons are created from the decays of other subatomic particles, called pions, but these decays occupy a large volume compared to the beam pipes used to channel the particles in the accelerator.  The discovery of ionization cooling in this paper shows that it is possible to channel enough muons into a small enough volume to be able to accelerate the muons.

The reduced size of the muon bunches in the accelerator could be harnessed to cross each other and create a large enough number of collisions in a muon collider to explore fundamental questions in the study of subatomic matter. This new research demonstrates that ionization cooling reduces the transverse size of the beam and its lateral motion at the expected level, thereby giving confidence that a muon collider could become a viable accelerator.

The experiment was a technical tour-de-force. The MICE Collaboration developed a completely new method to cool the beam of muons created by the ISIS accelerator. The beam traversed specially designed absorbing materials such as lithium hydride, a compound of lithium and hydrogen, or liquid hydrogen cooled to around minus 250 degrees Celsius and encased by incredibly thin aluminium windows. This beam was very tightly focussed by powerful superconducting magnetic lenses, which created extreme forces between the magnetic elements, to increase the size of the cooling effect.

The exquisite precision of the cooling measurement required measuring the beam one particle at a time, rather than in bulk as is normally carried out in accelerators, which allows the scientists to understand the physical processes with unprecedented detail. After cooling the beam, the muons can be accelerated using standard radio-frequency (RF) cavities up to their required energy.

The University of Glasgow team has been a member of the collaboration since its inception and contributed to all parts of the experiment, including hardware (construction of the luminosity monitor), software (beam simulations, development of the experimental data base, description of the geometry) and analysis of the physics data.

Professor Paul Soler said: "Ionization cooling is a game-changer for the future of high-energy muon accelerators, such as a muon collider, and we are extremely grateful to all the international funding agencies, including STFC in the UK, for supporting the experiment and to the staff at the ISIS neutron and muon source for hosting the facility that made this result possible.”

Link to paper in Nature