New research on generating oxygen from water found on the surfaces of other planets could help support future long-term missions to the Moon and Mars.

Researchers from the University of Glasgow and colleagues took a series of gruelling flights into microgravity to study how the different gravitational pull of other planets could affect the process of electrolysis. 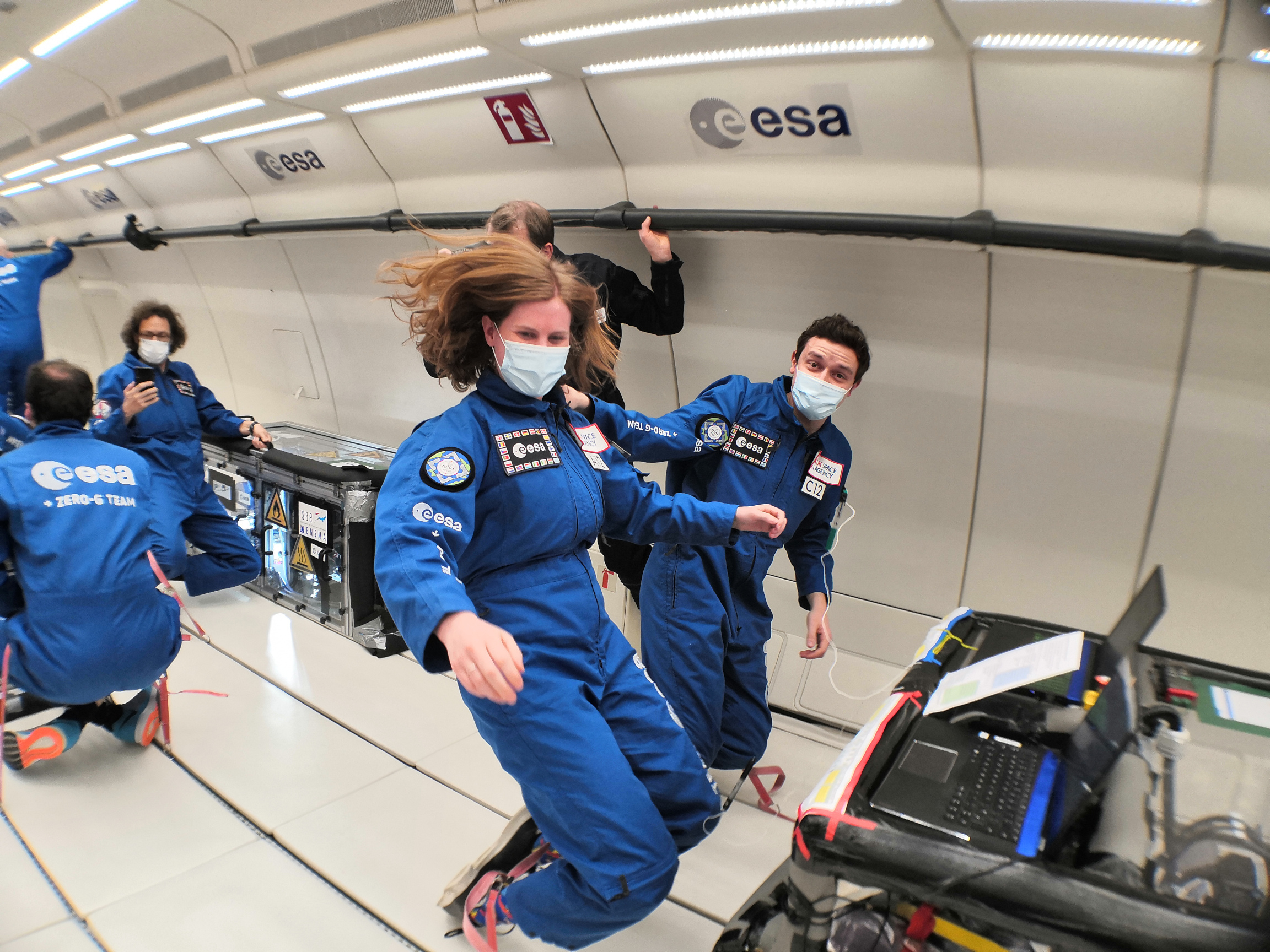 Electrolysis uses electric current, passed through two electrodes, to split water into its constituent gases – hydrogen and oxygen. Oxygen is vital to space missions to allow astronauts to breathe and to refuel their rockets.

Currently, space missions carry all the oxygen they require with them in bulky tanks. However, as plans to establish permanent bases on the Moon and Mars gather pace, space scientists are proposing to find sources of oxygen instead in the form of ice, which may be present on both planetary surfaces.

Electrolysing the melted ice could free missions from the need to carry all of their own oxygen, and help proposed long-term habitations like NASA’s Artemis lunar station become self-sustaining.

While the process of electrolysis on Earth is well-understood, much less is known about how it might function in the lower-gravity environments of Mars, where the pull of gravity is one-third that of Earth, and the Moon, where it is just one-sixth.

In a new paper published in Nature Communications, the research team, led by Dr Bethany Lomax, describe how they set out to find answers to those questions for the first time.

To do so, they designed and built an experiment to take into the microgravity environments created during parabolic flights. In those flights, aircraft create brief periods of weightlessness by flying in alternating upward and downward arcs.

Aboard an Air Zero G Airbus A310 flown from an airport in Germany by the European Space Agency and Novespace, the researchers deployed four electrolysis cells built into a small centrifuge.

As the plane arced through microgravity, they were able to recreate the lower gravitational conditions of the Moon by spinning the centrifuge at different speeds. While doing so over the course of three separate flights of 31 parabolic arcs each, they measured the bubbles of oxygen produced at each cell’s electrodes.

Their results suggested that the electrochemical cells would produce 11% less oxygen in lower gravity than it would on Earth if more power were not supplied to compensate. Further experiments undertaken on Earth, which explored the oxygen yield produced in higher-gravity conditions of up to eight times that of Earth’s, allowed the team to produce further data showing that it was possible to extrapolate the results to find reliable results for lower-gravity conditions too.

Dr Lomax, now a research fellow at the European Space Agency, said: “There seemed to be a gap in previously reported work, where the drop in efficiency at gravity levels relevant to the Moon and Mars was not looked into experimentally. The experiments that we were able to do on board the microgravity parabolic flights aimed to fill that gap. After extending those experiments to hypergravity conditions up to 8 g, we’ve also been able to show that there’s correlation between the results in both conditions, which suggests that future experiments might not need to go to the same resource-intensive ends that we did.

“The process of taking the flights to get those results was challenging, not just the nausea of the constant climbs and drops during the parabolas but also in arranging to travel from the UK to Germany during the pandemic. The whole team worked really hard to get the experiment ready in time for flight.

“However, it was worth for it the observations we were able to make, which we hope will be of real use to future space mission planners. The reduction in efficiency we’ve observed might not seem like a huge difference but in space missions, where every watt of power needs to be carefully budgeted for, the extra electricity that would be needed to match the cells’ terrestrial performance will have to be considered.”

Dr Mark Symes, of the University of Glasgow’s School of Chemistry, a co-author of the paper and Dr Lomax’s PhD supervisor, added: “The experiment that Dr Lomax designed was ambitious and required a lot of effort to, literally and metaphorically, get off the ground. However, the results are a valuable contribution to the growing body of science that will underpin long-term human habitation of other planets. I’m looking forward to seeing how future work can build on these findings.”

Researchers from the Universities of Glasgow and Manchester, the European Space Research and Technology Centre in the Netherlands and the Johns Hopkins University Applied Physics Laboratory in the United States contributed to the paper. The team had the opportunity to take their experiments into microgravity as part of the European Space Agency’s ‘Fly Your Thesis’ programme.

The paper, titled ‘Predicting the efficiency of oxygen-evolving electrolysis on the Moon and Mars’, is published in Nature Communications. The research was supported by funding from the European Space Agency’s Networking/Partnership Initiative, the UK Space Agency, the Engineering and Physical Sciences Research Council (EPSRC), the Institution of Mechanical Engineers, and the Royal Society.