Stone me! Lost carvings of the ancient Kingdom of Strathclyde turn up in Govan 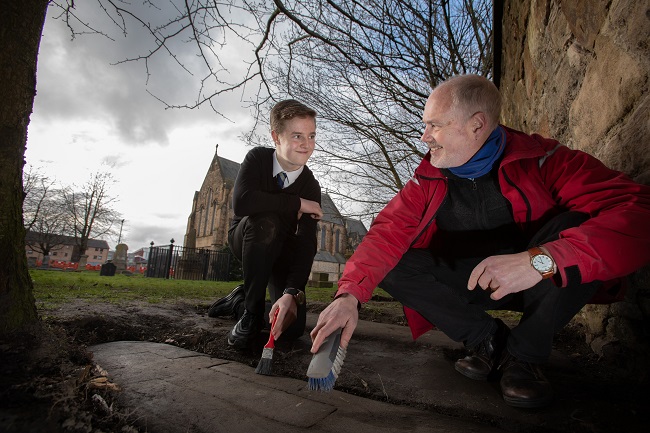 A community archaeology dig in Govan has uncovered long-lost gravestones from the Middle Ages, when the area was a political and religious power centre on the Clyde.

Volunteers on the ‘Stones and Bones’ community dig set out in search of a set of lost gravestones in the graveyard of Govan Old Parish Church.

One young volunteer, 14-year-old local school pupil Mark McGettigan, was helping out with the survey of the area when he felt something solid below the surface in the graveyard.

Mark has found what turned out to be the first of three lost medieval sculptured stones, part of a unique and nationally important collection called the Govan Stones.

The new discoveries, which date to the 10th-11th centuries, feature crosses and Celtic interlace designs similar to those on the stones housed inside the church.

Mark’s mother Sandra said: “My son Mark has always wanted to be an archaeologist. When I saw there was a community dig in Govan, I signed us both up to take part. I still can’t quite believe that on Mark’s very first archaeological dig he uncovered these stones that everyone thought was lost forever.”

Mark, an S3 pupil from Lourdes Secondary School, said: “I was just prodding the ground to see if there was anything there and suddenly it made a noise and I realised I had hit something . Myself and two of the archaeologists worked out the area of the object and started to dig it out and clean it. I wasn’t too sure at the start what it was. But then we checked with the records and we realised it was one of the lost Govan Stones. I am extremely happy, in fact I’m ecstatic at what I helped to uncover.”

The Stones and Bones dig was being carried out by Northlight Heritage with local participants for the Govan Cross Townscape Heritage Initiative and the Glasgow City Region City Deal .

The Govan Stones, most of which are now housed in Govan Old Parish Church, shine light into an obscure period of history before the nation of Scotland existed, when warlords battled for control of the British Isles and Viking long ships caused mayhem along Scottish coasts and waterways.

A total of 46 stones were found in the graveyard in the 19th century, and 31 of them were taken into the church for safe keeping.

The remaining stones were displayed against the wall of the churchyard, under the shadow of the Harland and Wolff shipyard. In 1973, the shipyard building was demolished and scholars believed that the stones were destroyed in the process.

However, it now seems likely that many of these long-lost stones have survived and await rediscovery by Mark and the community dig.

Professor Stephen Driscoll, the University of Glasgow’s Professor of Historical Archaeology, is part of The Govan Heritage Trust, which owns Govan Old Parish Church and the Govan Stones. He said: “This the most exciting discovery we have had at Govan in the last 20 years. The Govan Stones are a collection of international importance and these recovered stones reinforce the case for regarding Govan as a major early medieval centre of power.

“The discovery is very timely because the Govan Heritage Trust is embarking on a major refurbishment of Govan Old, which will culminate in a redisplay of the collection. In the coming months we look forward to continuing this community archaeological work to locate the other lost stones to assess their condition from a conservation perspective and to consider how best to secure their long-term future.”

The Govan Heritage Trust are currently running a crowdfunding campaign to secure the future of the building and its rare collection. Anyone wishing to support the Trust can contribute at https://tghts.charitycheckout.co.uk/profile. 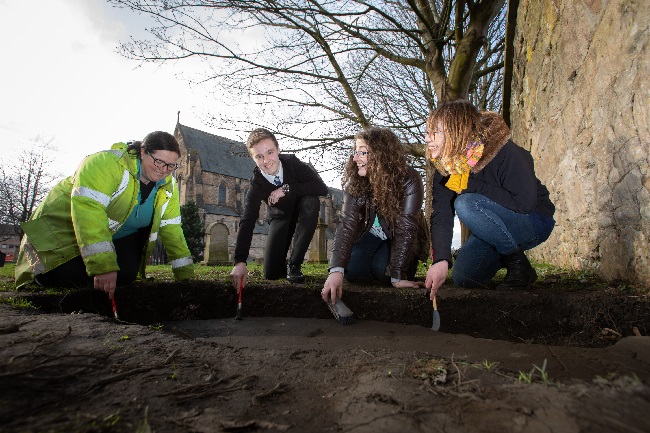 Ingrid Shearer of Northlight Heritage said: “We’re delighted that our volunteers have had the opportunity to make such a significant discovery. They’ve toughed it out through rain and snow over the past few weeks and their hard work and commitment has really paid off. Govan Old is the oldest churchyard in Scotland and we hope that this find will give a boost to plans for the future.”

Councillor Kenny McLean, City Convener for Neighbourhoods, Housing and Public Realm at Glasgow City Council, said: “This work - funded by the Glasgow City Region City Deal and the Govan Cross Townscape Heritage Initiative - aimed to show the historic significance of Govan, and I am delighted to say this discovery has achieved that aim in the best way possible.

“The unearthing of these stones is of international importance, and is all the more remarkable given that they were discovered by a 14 year-old enthusiast, and Mark deserves all the congratulations coming his way. The excavation was a stage of the public realm work that will make Govan Old and this part of Govan even more attractive for the people who live, work and visit there, and underlines the fantastic heritage of the area.”

The Stones and Bones community archaeology project is being funded by the  Glasgow City Region City Deal and Govan Cross Townscape Heritage Initiative. The archaeology forms part of the third phase of public realm works being taken forward as a priority of the Central Govan Action Plan. The graveyard and the stones form a Scheduled Monument due to their national importance and are protected under the Ancient Monuments and Archaeological Areas Act 1979. The current works have scheduled monument consent from Historic Environment Scotland.

The Govan THI is supported by The National Lottery through The Heritage Fund. Riona McMorrow, Acting Head of The Heritage Fund in Scotland, said: "This is an incredibly exciting find for the community of Govan and for the country as a whole. One thousand years of history has lain undiscovered until now but thanks to players of the National Lottery, these stones can help shine a light on the town’s medieval past. It is the discovery of a lifetime for the volunteer archaeologists involved and one I’m sure they will never forget."

To support The Govan Stones: https://tghts.charitycheckout.co.uk/profile

The Stones and Bones community archaeology project is being funded by the Glasgow City Region City Deal and Govan Cross Townscape Heritage Initiative, and run by Northlight Heritage. The archaeology forms part of the third phase of public realm works being taken forward as a priority of the Central Govan Action Plan. The graveyard and the stones form a Scheduled Monument due to their national importance and are protected under the Ancient Monuments and Archaeological Areas Act 1979. The current works have scheduled monument consent from Historic Environment Scotland.

The National Lottery Heritage Fund - Using money raised by the National Lottery, we Inspire, lead and resource the UK’s heritage to create positive and lasting change for people and communities, now and in the future.