Individuals and organisations representing business, academia, charity, sport and the performing arts – including one academic and alumnus from the College of Medical, Veterinary and Life Sciences (MVLS) – were honoured for their contribution to civic life by Glasgow’s First Citizen.

The awards honour men and women who have dedicated their professional lives to public service, worked selflessly for their communities or distinguished themselves in business, the arts, sport or entertainment.

Professor Paul Garside, Chair in Basic Immunology at the Institute of Infection, Immunity and Inflammation and Dean of Global Engagement, was one recipient for his contribution to education. 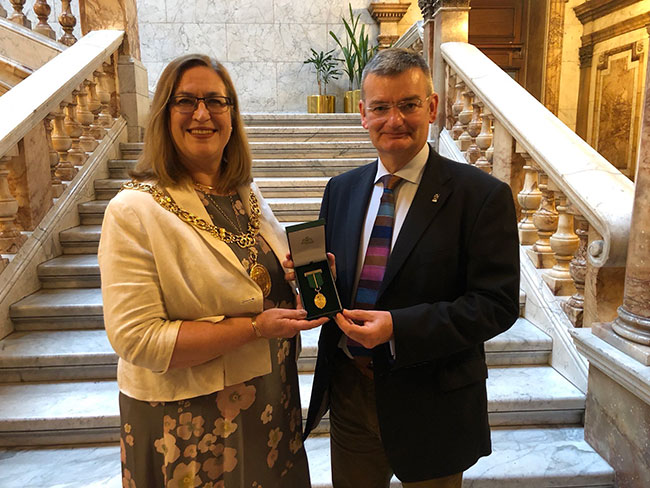 School of Veterinary Medicine alumnus, athlete and Diamond League Champion Laura Muir received a Lord Provost’s Award for Sport. World number one over 1500m, as well as European and British record holder, Laura currently has her sights on a gold at the Athletics World Championships in Doha.

Professor Garside said: “I’m delighted and honoured to accept this recognition from my adopted city - particularly in my 30th year in Glasgow. I have been very lucky to have an extremely rewarding career greatly enriched by colleagues and students from all over the world. I believe more strongly than ever in the importance of education.”

Laura said: “It's a real honour to receive this award from the Lord Provost on behalf of the people of Glasgow. A city where my sporting career has gone from strength to strength and which hosted the European Championships – one of the most memorable moments of my career. Memories that will last a life time.”

“Paul has an outstanding track record for research, teaching, and outreach, and this award shows that the impact of his work goes far beyond our University and our city. Laura’s incredible successes are world-class, and to have achieved them while gaining her degree in Veterinary Medicine is inspirational.”

Professor Garside is a world expert in immunology, as well as a leading research scientist, who formed part of the research team that successfully brought the Rheumatoid Arthritis Centre Excellence (RACE) to the University of Glasgow. He helped establish an internationally-accredited laboratory in Blantyre in Malawi following approval of £1 million funding from the Scottish Government’s International Development Fund. Currently the University’s Dean for Global Engagement (Africa and Middle East), he continues to teach undergraduates immunology subjects and is an enthusiastic STEM Ambassador.

Laura Muir discovered her talent for running while studying to become a vet at the University, successfully graduating, with breaks for competitions, last year.  She was crowned Scotland’s Athlete of the Year in 2016 and received the Young Scot Sport Award in 2017. She made her international debut in the 2011 European Cross-Country Championships, as part of the Great Britain junior women’s team that lifted gold. She retained her two indoor European International Championship titles competing on home soil here at the Emirates in front of sell-out crowds.

Laura’s coach, Andy Young, accepted the award on her behalf.