The University of Glasgow has formally launched an action plan for the deaf and hard of hearing community who rely on British Sign Language (BSL). 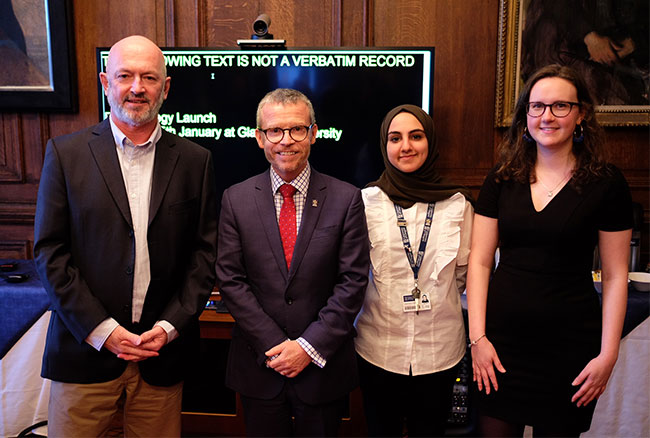 The plan was unveiled at an event on campus which was introduced by Professor Frank Coton, Disability Equality Champion and, Vice-Principal Academic and Educational Innovation, who thanked the BSL working group for bringing the plan forward.

Professor Coton said: "We hope that as more and more of our staff and students become aware of our commitment and identify themselves to us as speakers and translators of BSL, they will bring new momentum and new life to the plan as presented today, generating ideas and initiatives of their own - leading to a self-sustaining and meaningful long-term conversation around how we make the University of Glasgow a more inclusive and welcoming learning environment, not just for our BSL members, but for our entire community."

There were also contributions from Fatemeh Nokhbatolfoghahai, SRC Vice-President Student Support, Hannah Webb, President of the Student Sign Language Society, and from Dr Gerry Hughes, who overcame many obstacles to pursue a career in teaching and who was the first deaf person to sail single-handed around the world via the five southernmost capes. The University awarded him an honorary degree in 2014. At the action plan launch, Dr Hughes explained why he believes the University's BSL plan is so significant.

Great to have @GHughesQuestlll, who was the first deaf person to sail around the world single handed, join us for the launch of our British Sign Language Action plan today!
He outlines the importance of accessibility for deaf people at universities. #BSLPlan pic.twitter.com/Icpji8MA4O