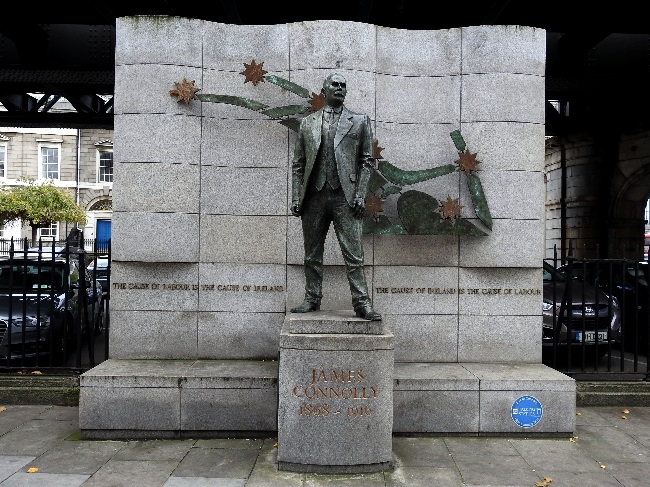 Academics at the University of Glasgow have discovered a short story which they believe could solve the mystery of a lost play by revolutionary socialist James Connolly.

The story called The Agitator’s Wife was discovered last year during the 150th anniversary year of the birth of the Irish rebel leader who was born in Scotland in 1868.

Edinburgh-born Connolly, a gifted radical thinker, is renowned for his journalism and political theory. However, he is less celebrated for his creative writing which these Glasgow academics believe takes on a new significance with the discovery of this short story.

Connolly was the earliest Irish republican to link the struggle for independence not just to class equality but also to gender equality.

He was one of the contributors to and signatories of the Irish Proclamation of Independence at the Easter Rising of 1916, which from the first line positioned Irish men and women as equals.

The anonymous short story, believed by the academics to be written by Connolly, was discovered in a journal archived in Warwick University Library.

The Agitator’s Wife is centred around a dockworkers’ strike. The struggles of Scottish dockers against the Shipping Federation on the Leith waterfront from the late 1880s onwards was hugely influential in shaping Connolly’s political development.

The Agitator’s Wife tells the story of dockers’ leader Tom Arnold, driven to exhaustion by the pressures of leading a strike in the face of police provocation and brutality. At home his child is at death’s door and this sense of despair drives him to contemplate suicide.

Tom’s wife Mary steps into his shoes and leads the weary strikers when they are about to give up the fight. A local doctor who is highly respected in his community is reluctant to back the strike. However, Mary Arnold persuades him to write a letter in the newspaper publicly supporting the raising of funds for the starving wives and children of the strikers. This action helps to turn the tide and Mary Arnold, the Agitator’s Wife, saves the day for the strikers and their families.

Writing in the Irish Studies Review published today (Tuesday 15 January 2019) about their discovery, Glasgow academics Professor Willy Maley, Dr Maria-Daniella Dick and Kirsty Lusk, said: “No script has ever been found, and there is no specific record of performance” but The Agitator’s Wife was “first alluded to in his (Connolly’s) daughter Nora’s 1935 memoir entitled Portrait of a Rebel Father”, as part of “a conversation between her father and mother – Lillie (née Reynolds) when they lived in America.”

The Irish Studies Review article goes on to say: “We believe we may have unearthed, if not the play itself, then at least a version of the missing play. An anonymously published short story in the February 1894 issue of an obscure and short-lived Christian Socialist journal, The Labour Prophet, bears the title “The Agitator’s Wife”.

“This is of course a short story and not a play, but in every other sense it fits the bill for Connolly’s missing piece of writing. It was written in the appropriate period, it has the same title, it is rich in dialogue and it reminds us strongly of Connolly’s other writing in its politics, its themes and in its socialist feminist viewpoint, which was rare for that time.

“In terms of characters, dialogues and narrative, The Agitator’s Wife certainly has the potential to be adapted for the stage. Perhaps Connolly wrote the story, saw this potential and then developed it in this way. More work obviously needs to be done to confirm whether the story is in fact the basis of Connolly’s lost script, but circumstantial, textual and contextual evidence strongly suggests that it may be.”

Professor Willy Maley, Professor of Renaissance Studies, University of Glasgow said: “For Connolly, his idea of a workers’ republic had at its heart the equal rights of all men and women. In fact, his contribution can be seen in the Proclamation of Independence read in front of the Dublin’s GPO Building at the start of the 1916 Easter Rising. From the first line of the Proclamation, Irish men and women were regarded as equals with religious and civil liberty, equal rights and equal opportunities guaranteed to all citizens.

“It is no surprise then that at the heart of The Agitator’s Wife is a partnership of equals between Tom and Mary Arnold – where when needed they could reverse roles. Putting this into context, this was written at a time when women couldn’t even vote never mind be seen as equals.

“The discovery of the short story with the same name as The Agitator’s Wife, does raise the possibility in our minds that the “play” Connolly’s daughter Nora heard her mother speak of and recounted in her memoir was in fact a short story, and that Nora Connolly may have just simply misheard or misinterpreted.”

Professor Maley added: “We hope this discovery will contribute to the discussions around the writings of James Connolly and his political impact and historical significance.

“However what is obvious now from the short story is the fact it lends itself easily to being adapted to the stage. We hope that this is something we can work on in partnership with a theatre company in order to bring it to a wider audience.”

The Irish Studies Review article is also published on the University of Glasgow’s Research portal and can be found here.