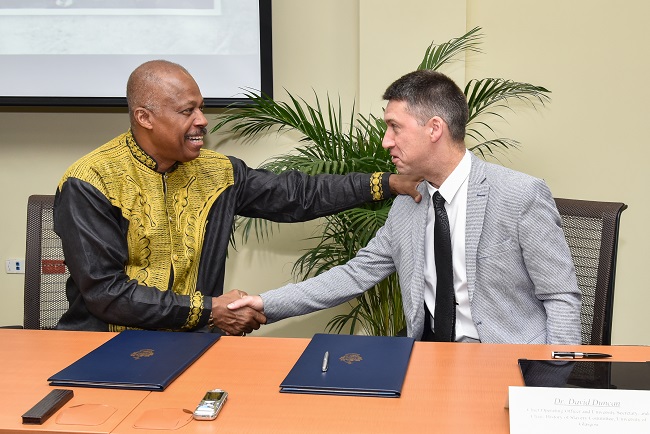 An historic Memorandum of Understanding (MOU) has been signed by senior representatives of The University of Glasgow and the University of the West Indies at a ceremony held in the Mona campus of The UWI in Kingston, Jamaica on Wednesday 31 July 2019.

The MOU is one of a series of recommendations made in a Report into Historical Slavery which the University of Glasgow published in September 2018. That report, thought to be the first of its kind in the United Kingdom, acknowledged that whilst the University of Glasgow played a leading role in the abolitionist movement in the 18th and 19th centuries, the institution did also receive significant financial support from people whose wealth derived, in part, from slavery.

Under the terms of the MOU the institutions have agreed to forge a positive academic partnership which will include the establishment of the Glasgow-Caribbean Centre for Development Research. The Centre will host events and activities, sponsor research work, coordinate academic collaborations with other universities, including The UWI, and help to raise public awareness about the history of slavery and its impact around the world.

Over the next two decades, the University of Glasgow has committed to raising and spending £20m as part of its programme of reparative justice. This will include seed funding, benefactions and research grant income raised from grant-giving bodies. Glasgow will allocate some resources to support the running of the Centre, scholarships, research, public engagement, and related initiatives. Both institutions will work together to attract external funding for mutually agreed projects that will benefit the communities of the Caribbean islands and other parts of the world affected by the slave trade.

Signing the MOU on behalf of the University of Glasgow was Dr David Duncan, Chief Operating Officer and University Secretary.

Dr Duncan said: "This is a historic occasion for both the University of Glasgow and The University of the West Indies. When we commissioned our year-long study into the links the University of Glasgow had with historical slavery we were conscious both of the proud part that Glasgow played in the abolitionist movement, and an awareness that we would have benefitted, albeit indirectly from that appalling and heinous trade. From the very first we determined to be open, honest and transparent with the findings, and to produce a programme of reparative justice.

"In this we were greatly assisted by Professor Sir Hilary Beckles, Vice-Chancellor of the University of the West Indies who was one of our external advisors. I am delighted that as a result of the report we are now able to sign a Memorandum of Understanding between the University of Glasgow and The UWI and I look forward to the many collaborative ventures that we will jointly undertake in future."

As co-signatory Professor Sir Hilary Beckles said he: “Was proud of the decision of the University of Glasgow to take this bold, moral, historic step in recognising the slavery aspect of its past and to rise as an advocate of reparatory justice, and an example of 21st century university enlightenment.”

Shortly after he became Vice-Chancellor of The University of the West Indies Sir Hilary received an Honorary Doctor of Letters from the University of Glasgow for his work as an historian, and was invited to advise the university on how best to address its historical links to slavery.

Another commemorative signing of the MoU is scheduled at the University of Glasgow on August 23, 2019, coinciding with UNESCO’s International Day of Remembrance of the Slave Trade. It will include the unveiling of a commemorative plaque in honour of the enslaved.