After the Factory – do you remember the Singer Sewing Machine Factory?

Researchers working on a project called “After the Factory” want to interview people who worked in the Singer sewing machine factory in Clydebank that closed in 1980. 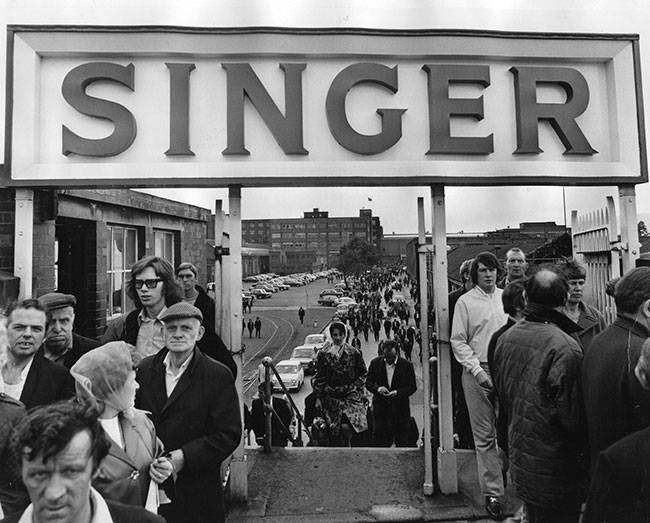 Dr Jackie Clarke at the University of Glasgow leads “After the Factory”, which is funded by the Royal Society of Edinburgh. The network brings together local partners in the West of Scotland with researchers who are studying the legacies of de-industrialisation in countries across Europe.

One of the projects developed by the network brings together researchers - Dr Clarke at the University of Glasgow, and Dr Andy Clark, Newcastle University - with partners at West Dunbartonshire Council, holder of the Singer Sewing Machine Collection and Singer Archive, a Recognised Collection of National Significance, derived from the major Singer sewing machine factory that operated in Clydebank from 1884-1980.

The research team is working with volunteers to interview people who worked in the factory, recording their memories of working life at and after Singer, the role that the factory played in the local community, and what happened once it closed.

Dr Clarke added: “People sometimes think their stories won’t be of interest to historians or that they don’t have much to say. But once you get them talking, you learn so much. And with this project, it’s not just researchers who benefit from hearing these stories. We’re creating a resource for the community so we really want to hear from as many people as possible – even if they think they don’t have much to say.”

The interviews will become part of the Singer Archive and will be available to individuals and groups who want to understand more about Singer and the social history of the area. As part of the “After the Factory” project, West Dunbartonshire Youth Theatre are working with the interviews collected in the archive to develop a piece of theatre based on people’s stories about Singer.

Anyone who is interested in sharing their memories of the Singer factory should email arts-afterthefactory@glasgow.ac.uk or phone Andrew Graham (at West Dunbartonshire Council) on 01389 772149.