A cancer treatment already approved for use in certain types of cancer has been found to block cell growth in a common form of lung cancer for which there is currently no specific treatment available. 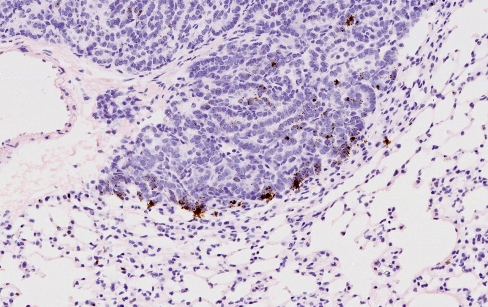 The new findings, published today in Science Translational Medicine and led by the University of Glasgow, suggest that a large number of patients could benefit from this treatment – a second generation EGFR inhibitor (a drug that slows down or stops cell growth) – if used in combination with additional therapies.

The scientists hope the treatment could be deployed for use in patients in the near future, given it is already approved for the treatment of other cancers.

Cancers of the lung kill more people worldwide than cancers of any other organ, more than 1.5m people per annum. The largest subtype of lung cancer, which the researchers studied, is adenocarcinoma.

One third of adenocarcinoma cancers carry a mutant gene called KRAS, which the researchers show requires the activity of any of four ‘EGFR/ERBB growth factor receptors’ to drive cell proliferation. There are presently no KRAS-inhibiting drugs available for treatment of these cancers and first generation EGFR drugs have failed to show any benefit to this form of cancer.

Lead author Dr Daniel Murphy, Senior Lecturer at the University’s Institute of Cancer Sciences and a scientist at Glasgow’s Cancer Research UK Beatson Institute, said: “There is a pressing need to develop alternative strategies for more effective treatment of KRAS‐driven lung cancer, and this is a promising breakthrough which we hope could benefit patients soon.

“The inhibitor we studied – a multi-ERBB inhibitor – helped sensitise tumours and was of therapeutic benefit when used in combination with another cancer drug called Trametinib, resulting in a clear extension of lifespan.

“Based on our findings, we hope lung cancer patients with the KRAS-driven form of lung cancer may in future benefit from inclusion of this inhibitor in their treatment plan.”

Dr Catherine Pickworth of Cancer Research UK said: “These findings in the lab have revealed a new role for four related molecules in a particular type of lung cancer. Furthermore, by targeting these molecules in mice the researchers found this increased the effectiveness of an existing lung cancer drug.

“We now need further studies to work out if this holds true in people and what the side effects might be. We urgently need new and better ways to treat lung cancer, a disease where survival has remained stubbornly low.”

Dr Alan McNair from the Scottish Government Chief Scientist Office said: “We are delighted to have been a partner in funding this important research. It is through collaborations of this type that effective new approaches to the treatment of lung cancer are likely to be developed.”

Ian Jarrold, Head of Research at the British Lung Foundation, said: “Lung cancer is the third most common cancer in the UK, so research into new treatments is vital. This is a promising finding, which could potentially help thousands of people a year, and we are delighted to have been involved in funding the project. More research is needed now to determine if this combination of treatments, which has proven successful in a laboratory setting, is safe and effective in people with lung cancer.”

The paper, ‘The ERBB network facilitates KRAS-driven lung tumorigenesis,’ is published in Science Translational Medicine. The work was funded by a MINT Collaborative grant from Merck Sharpe & Dohme; a Deutsche Krebshilfe grant; and grants from the European Commission Marie Curie Actions and the British Lung Foundation in collaboration with the Scottish Government Chief Scientist Office.