In what is thought to be the first major European partnership to be agreed by any UK Higher Education institution since the referendum on Brexit, the University of Glasgow has entered into a formal collaboration with Leuphana University of Lüneburg.‌ 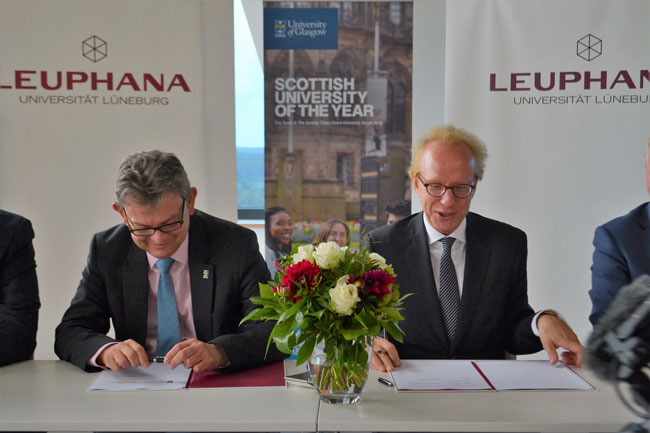 The agreement, which was signed at the summer graduation ceremony in Lüneburg by Professor Sir Anton Muscatelli, the Principal and Vice-Chancellor of the University of Glasgow, and Professor Sascha Spoun, President of Leuphana University, establishes a European Centre for Advanced Studies to be based in the German state of Lower Saxony. It will aim to assist with "the advancement of science, research and education" with a mixture of joint courses, research collaborations, and student and staff exchanges".

The Principal of the University of Glasgow, Professor Muscatelli, said: "I am absolutely delighted to sign this agreement with our friends and partners in Lüneburg. The creation of a European Centre for Advanced Studies builds upon existing collaborations between our institutions and will allow for even closer relationships going forward. We know that working together can produce more effective and more impactful research and with Brexit on the horizon it is essential that we continue to be heavily involved in successful collaborations. This new European Centre for Advanced Studies is an important milestone for both the University of Glasgow and Leuphana University."

Leuphana University of Lüneburg was founded in 1946 as a teacher-training college and was granted University status in 1989. It is renowned for the innovative approach it takes to teaching and learning. The University is based around four faculties – education; humanities and social science; sustainability; and business and economics.

Both the Principal of the University of Glasgow and the President of Leuphana University also held talks with Dr Sabine Johannsen, State Secretary for Science and Culture of the German State of Lower Saxony, on how to further deepen educational links between Scotland and Northern Germany. 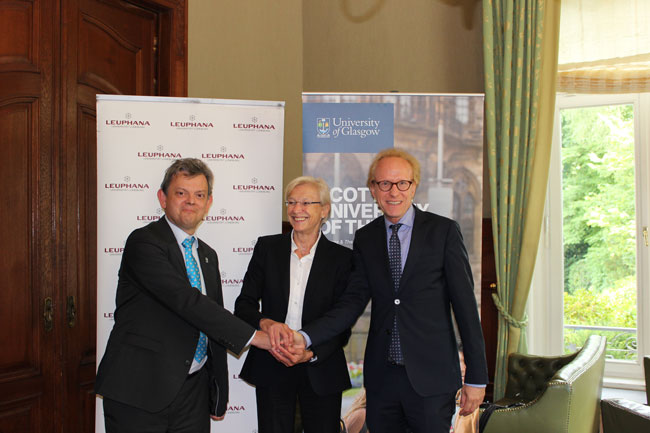 Professor Sascha Spoun, President of Leuphana University of Lüneburg said: "We are extremely pleased to sign this agreement with our friends and partners from Glasgow. Building on academic areas in each of the two universities and on existing successful collaborations, the creation of the European Centre for Advanced Studies will significantly increase our joint research activities.

"Furthermore, it brings the opportunity to send out a strong political signal for the idea of Europe and the future development of academia in times of Brexit. We are convinced that the Centre has a great potential to promote the integration of Scotland and Lower Saxony through the inclusion of regional networks and activities, which will bring about a prosperous exchange of know-how and ideas and create additional added value for both sides."