Thermal imaging can detect how animals are coping with their environment, avoiding the need for capture, according to new research.

The technique, which could transform how biologists investigate responses of wild animals to environmental changes, was tested on a population of a small songbird – the blue tit – at the University of Glasgow’s Scottish Centre for Ecology and the Natural Environment (SCENE) at Loch Lomond. 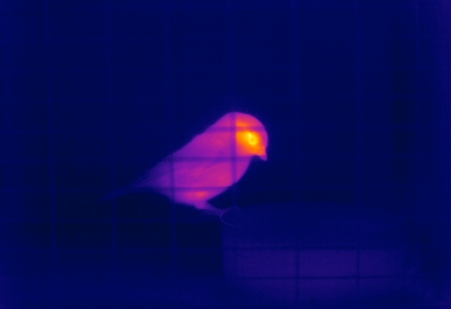 The thermal imaging technique means biologists can learn how animals are responding to their surroundings without having to capture and measure them (necessary with current methods). This is because body temperature can change when animals make physiological adjustments to preserve energy or deal with environmental stressors

The study, published in Scientific Reports, found that skin temperature around the eye in the blue tit is lower in birds in poorer condition, and in birds with higher levels of stress hormones in their bloodstream.

In challenging circumstances, such as during poor weather, or when food is scarce, animals need to save energy. One way they can achieve this is by reducing heat production. Challenging conditions also trigger a stress response, which is associated with changes in blood flow around the body – blood is diverted to the areas with the greatest need, increasing core temperature and reducing surface temperature. So, both processes lead to a lower surface temperature.

Corresponding author Dr Paul Jerem, from the University’s Institute of Biodiversity, Animal Health and Comparative Medicine (IBAHCM) said: “These findings are important because understanding physiological processes is key to answering the questions of why animals behave the way they do, and how they interact with each other and their environment.”

“Changes in the physiological processes we detected using thermal imaging are generally the first response to environmental challenges. So being able to easily measure them in wild animals means we might be able to identify populations at risk before any decline takes place – a primary goal of conservation.”

Dr Dominic McCafferty, Senior Lecturer at IBAHCM, added: “Current methods of investigating physiological state in free-living species still generally mean animals need to be trapped and handled, something which is difficult, potentially invasive, and limits research to those species which can be easily caught. Additionally, natural patterns of behaviour are also interrupted.”

“By looking at this promising alternative strategy - studying body temperature – we are using characteristics we can measure without invasive sampling to infer other underlying physiological processes.”

The study, ‘Eye region surface temperature reflects both energy reserves and circulating glucocorticoids in a wild bird’ is published in Scientific Reports. The work was funded by the Biotechnology and Biological Sciences Research Council.