The University of Glasgow was delighted to welcome First Minister Nicola Sturgeon to the Imaging Centre of Excellence (ICE) at the Queen Elizabeth University Hospital today – offering an insight into one of the key sectors in which Scotland has the potential to truly lead the world. 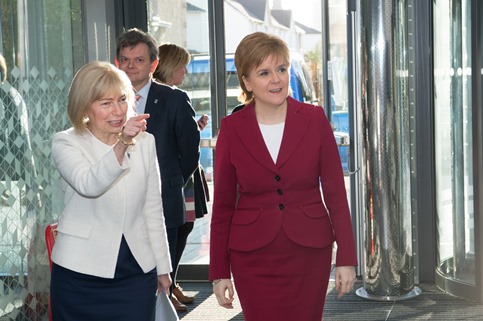 Along with the Principal, Professor Sir Anton Muscatelli, and the Head of the College of Medical, Veterinary & Life Sciences, Professor Dame Anna Dominiczak, the First Minister met many of the key industry partners working at the ICE building, while hearing about the immense health and economic potential offered by the precision medicine agenda, in which Glasgow is already recognised as a world leader.

Alongside other areas like quantum technology, precision medicine is one of the key emerging sectors in which Glasgow has a major competitive advantage – and which have together been described by Professor Muscatelli as having the potential to be to the 21st century Glasgow economy what shipbuilding and heavy industry were in the 20th century. 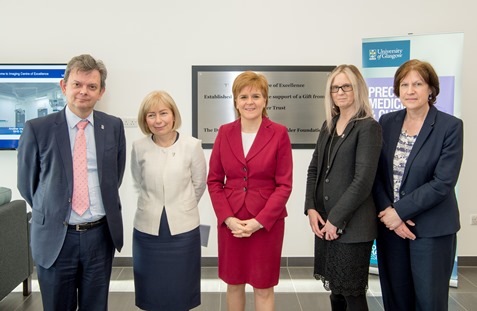 “I was pleased to visit the facility, meet some of the staff and industry partners involved and find out more about their future plans. It is telling that the centre is attracting academics and businesses to relocate from elsewhere in Europe to be based here, as part of this world-leading beacon of science and innovation.”

Professor Dame Anna Dominiczak, Vice Principal and Head of the College of MVLS said: “I was delighted to welcome the First Minister to the University of Glasgow’s Imaging Centre of Excellence (ICE) to show her first-hand the importance of ICE to Scotland as a future global centre of excellence for precision medicine.

“Home to Scotland's first 7Tesla MRI scanner, the first of it’s kind in a clinical site in the UK, ICE brings together under one roof world leading research, NHS and global industry partners. This triple helix collaboration is ready to achieve fast returns for patients and for Scottish economy as evidenced by the award of the BEIS Science and Innovation Audit to the University of Glasgow.

“This audit will further strengthen our ability to deliver early diagnostics and precision prevention for Scotland and to share our excellence and leadership with other health systems world-wide.” 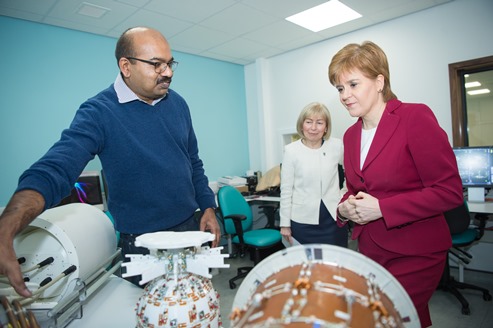 The Principal, Professor Sir Anton Muscatelli added: “Precision medicine will be one of the key emerging economic sectors in the coming years – and here in Glasgow we are lucky to have an unparalleled combination of leading infrastructure and skills which will put the City and Scotland as a whole at the forefront of this incredibly exciting field.

“In economic terms, as the consequences of Brexit unfortunately begin to take hold, it is going to be even more vital that Scotland is in a position to take every competitive advantage at our disposal and fully capitalise on the major opportunities which are available to us – and the precision medicine agenda offers not just major clinical and patient benefits, but could also have a major economic impact.

“The high-tech industries like precision medicine and quantum technology have the potential to be to Glasgow’s 21st Century economy what shipbuilding and heavy industry was to our 20th Century economy – and in these key areas, we have the genuine potential to lead the world, while creating skilled jobs and contributing to inclusive economic growth.

“This is an opportunity we cannot afford to let pass us by – and I was delighted to see the depth of the First Minister’s commitment to ensuring Scotland remains at the forefront of key emerging industries like precision medicine today.”