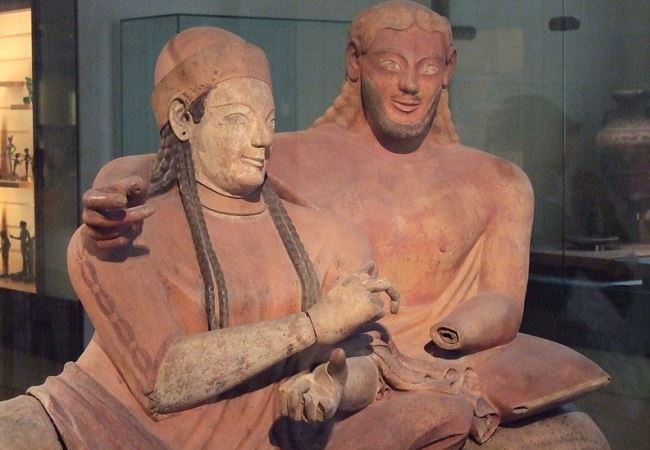 With a passion for stylish clothes and dressing up for parties, they made sure to record how good they looked so they could share them later with family and friends.

And unsurprisingly these fashion forward people lived in the Mediterranean between 1000-500 BC in what today we know as Italy.

This early Italian love of textiles grew as people started living together in larger settlements and new techniques and trade routes opened up giving the townsfolk access to lots of expensive goods including cloth.

The revelations are in University of Glasgow research published in the journal World Archaeology entitled “From value to desirability: the allure of worldly things”.

The report’s author, Dr Susanna Harris, Lecturer in Archaeology at the University, said: “This interest in wearing and celebrating textiles and love of clothing mirrored the growth of early towns, where people were living closer together and interacting.

“The textiles were desirable because they appealed to the senses through colour and pattern, some textiles were particularly fine and exclusive, demonstrating their owner’s ability to acquire expensive goods.

“I wanted to look at how textiles were part of this change to living in towns and larger settlements. Clothing helped these early townsfolk not only to look good but to fit in to and compete in these new communities”.

“And human nature being what it was on social occasions they wanted to look good and so began a love affair with textiles. Painting and sculptures from the time showcase the clothing and textiles as much as the people in them.

“I suppose they were capturing a time when these people were dressed up at a wonderful social event much like many of us do in our social media posts today when we are on a night out with our family and friends.”

These early towns had social gatherings or communal dining banquets called symposiums, which were parties where men and woman gathered to drink, eat and dance together.

And the images of these stellar parties also showcased the beautiful and elaborate clothing wore to these events, which were captured on tomb paintings, scenes on pottery like vessels or plates, mirrors and sculptures.

But the venue for these banquets wasn’t left out in this fashionable gathering. It too was dressed up and draped in beautiful rich textiles and showcased in the early imagery.

These fabrics were in rich colours like greens, blues, purples, reds and whites, some were so fine they were nearly translucent.

Dr Harris said: “The women at that time wore long draped textile tunics that were often edged with elaborate decoration while men had tunics with mantles or cloaks which had decorative edges. The clothing worn was made in rich and vibrant fabrics.”

“The people living in this area much like us today liked to go out and enjoy themselves or spending time with family and friends. And like today’s generation they wanted to capture how good they looked in the clothes they were wearing.”

“This was the first generation of this era to do this in paintings and sculpture before that it was very simple. At this time it became about showcasing the textile clothing and people in them.”

“I was able to look at magnificent images which are housed in museums around the world which show these early urban dwellers on a night out draped in beautiful rich fabrics, reclining on long banquet beds which again were covered in very elaborate textiles.

“It was all about the textile clothing giving them a sense of place and sense of themselves.”

Here are two images of artefacts which Dr Harris looked at as part of her research:-

Research Paper published today in World Archaelogy "From value to desirability: the allure of worldly things”