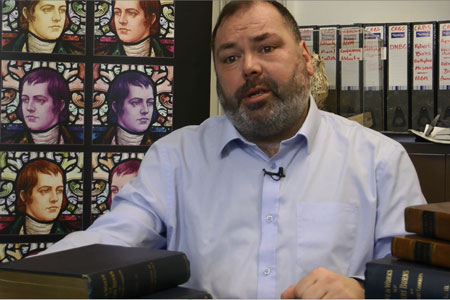 Robert Burns hid his radical and progressive political views “in plain view” while working for the Crown during the turbulent years of the late 18th century, a leading expert on Scotland’s national bard will reveal.

Professor Gerard Carruthers in his talk Robert Burns, the Excise Services and Politics in a time of Revolution on 6 February 2018 will also say that the bard’s political leanings were an “open secret” in the Civil Service where he worked.

Professor Carruthers, the Francis Hutcheson Professor of Scottish Literature and Co-Director of the Centre for Robert Burns Studies, made his revelations after studying recently unveiled Burns letters. His talk examines the bard’s place in what would be  today’s HM Customs and Excise, just after the French Revolution.

He will say: “There are lots of near-conspiracy theories through two centuries have sought to account for Burns’ career in the Excise service.

“The common idea in these theories is that the government had Burns where they wanted him: under their control and politically silenced.

“In fact as the new letters, by contemporaries of Burns, show - he was delighted (and not reluctant) to be given his position. Also, the new material reveals that Burns’ progressive political views were an 'open secret' in the Civil Service.

“Indeed, some of those intelligent and educated colleagues with whom he worked shared his views. “

The two letters were written by John Mitchell, the bard’s Excise boss, to one of the poet’s most important patrons Robert Graham of Fintry. Graham of Fintry, was a Commissioner of the Scottish Board of Excise, who helped to secure Burns’ job as an excise man in late summer of 1788.

These new letters have helped to inform the debate on the extent of the Bard’s radicalism. Today we know Burns was an opponent of monarchy and slavery, and a champion of democracy and the rights of man.

But the last four years of Burns’ life coincided with a movement for democratic and parliamentary reform that directly involved ordinary Scots in politics for the first time. Like many other poets at that time, many of his political poems and songs like Scots Wha Hae were published either anonymously or under a pseudonym.

As a paid government officer, he seemingly was forced into public silence especially after the French Revolution. He was even questioned by his superiors on his politics after he was accused of being a radical. A claim he refuted at the time and was exonerated.

Professor Carruthers said: “And in this 'space' Burns writes some of his most political songs, including 'Scots Wha Hae' and 'A Man's A Man'.

“Here in song, where the texts might be read as 'historic' or 'masonic', he was actually commenting on contemporary politics of that time.

“In both these songs and surrounded by his like-minded Excise colleagues, he was hiding his politics in plain view.”

The significance of the new letters located in the National Records of Scotland came to light as part of the University of Glasgow/Oxford University Editing Robert Burns for the 21st Century which is led by Professor Carruthers.

Professor Carruthers sold out talk Robert Burns, the Excise Services and Politics in a time of Revolution, will take place on Tuesday 6 February at the National Records of Scotland (NRS) in Edinburgh. The free Robert Burns: Radical Exciseman’ exhibition, featuring the John Mitchell letters, is on until 23 February also at the NRS,

Editing Robert Burns for the 21st Century project began in 2009, the 250th anniversary of the poet’s birth, and will take 15 years to complete.