Vaccinating livestock against foot-and-mouth disease could help to reduce poverty in eastern Africa, according to new research. 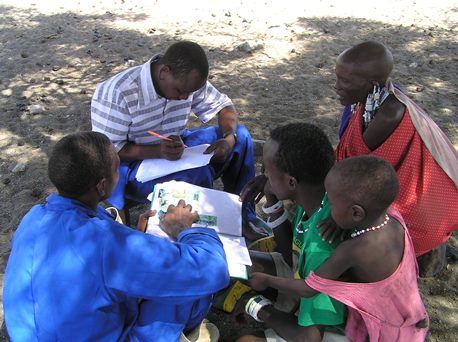 The study, led by the University of Glasgow and published today in Nature Ecology and Evolution, found that a vaccination programme targeting the circulating strains of foot-and-mouth disease in livestock, could help to alleviate poverty in eastern Africa.

The research, led by the University’s Boyd Orr Centre for Population and Ecosystem Health, looked at the causes and effects of foot-and-mouth disease in Tanzania, surveying farming households in the area and examining how the disease passed to livestock.

The team found that foot-and-mouth disease is a major concern among local people and that it has a high economic burden due to major reductions in milk production and sales, with devastating consequences on communities reliant on milk as a protein source.

The occurrence of disease in a household also has potentially serious effects on human health. Households burdened with the cost of a foot-and-mouth disease outbreak in their livestock typically spend around 25% less on human health.

The authors also tested livestock for past exposure to different types (named serotypes) of the foot-and-mouth disease virus, many of which are present in Tanzanian livestock and wild buffalo populations, hindering control. They found that the disease passes through eastern Africa in slow waves of specific virus types.

Crucially, they also found that, unlike in southern Africa, it is rare for livestock to become infected with foot-and-mouth disease from wild buffalo, which suggests that strategies to separate wildlife and livestock are unlikely to be effective in combatting the disease.

Lead author Dr Tiziana Lembo said: “In East Africa, foot-and-mouth disease control policies targeting the most affected communities have been constrained by a limited understanding of the role of wildlife in transmission to livestock, particularly in areas where both populations live in close proximity.

“Our research demonstrates that disease risks are driven by livestock- rather than wildlife-related factors. This suggests that strategies focusing on separation of susceptible livestock and buffalo, such as veterinary fences widely used in southern Africa, would have little effect in terms of reducing livestock infection in eastern Africa and could severely impact the preservation of Tanzanian unique ecosystems.”

The study concludes that the early detection of currently circulating virus types, coupled with proactive serotype-specific vaccination, could cost-effectively mitigate the economic and health impacts of foot-and-mouth disease in eastern Africa.

Joint first author Dr Richard Reeve adds: “The ongoing eradication campaign in South America relies on mass vaccination with a vaccine that protects against multiple serotypes simultaneously to cover all eventualities, as did the successful historical approach in Europe. However, no vaccines currently exist that are tuned to the serotypes circulating in sub-Saharan Africa, so this is not an option.

“The discovery that single serotypes are in fact moving in slow epidemic waves across the landscape offers a viable alternative: if we can quickly identify the current epidemic strain then we have the ability to deploy an appropriate (and available) serotype-specific vaccine to interrupt its spread and reduce its impact on the rural poor in these regions.”

In Africa foot-and-mouth disease is estimated to account for livestock production losses of around $2.3 billion each year. While large-scale vaccination strategies against foot-and-mouth disease have been implemented across southern Africa, control of the disease has been minimal in the east of the continent, where little is known about its local epidemiology.

Livestock production in Africa is key to national economies, food security and rural livelihoods, however around 85% of livestock keepers live in extreme poverty. Foot-and-mouth disease is a highly contagious livestock disease widespread in Africa that contributes to this poverty.

The study, ‘Waves of endemic foot-and-mouth disease in eastern Africa suggest feasibility of proactive vaccination approaches’ is published today in Nature Ecology and Evolution. The primary research underpinning this study was funded by the Biotechnology and Biological Sciences Research Council (BBSRC), the Department for International Development and the Scottish Government through the Combating Infectious Diseases of Livestock for International Development initiative. This research was also supported by a BBSRC Doctoral Training grant to fund Miriam Casey-Bryars’ PhD programme at the University of Glasgow.