An earthquake in South Korea which injured close to 100 people and caused tens of millions of pounds of damage was plausibly the result of nearby hydraulic fracturing works, scientists say.

In a new paper published today (Thursday 26 April) in the journal Science, researchers from the University of Glasgow, ETH-Zurich in Switzerland, and GFZ-Potsdam in Germany report on detailed seismological analysis of the magnitude 5.5 earthquake which occurred near the city of Pohang in November 2017. 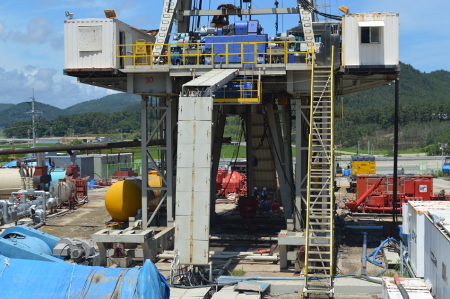 Hydraulic fracturing works by pumping pressurised fluid into the ground to fracture rock in order to achieve increased rates of flow – in this case, the intention was to enable circulation to produce geothermal energy. Between early 2016 and September 2017, many thousands of cubic metres of water were injected under pressure into boreholes reaching a depth of about 4 km beneath the site near Pohang.

Seismograms of induced earthquakes are generally indistinguishable from those of natural earthquakes. Therefore, investigations focus on a range of indicators, taking into account the location of earthquakes, their depths, and the history of stimulation activities conducted underground. By analysing publically-available continuous waveform and geodetic data from satellites, the paper contributes to the understanding of the nature of the event.

The study shows that the mainshock and its largest aftershocks occurred within 2 km distance or less of the geothermal site. Furthermore, they are located within 1.5 km distance of an induced event, which occurred in April 2017 during one of the underground stimulation operations.

These locations are confirmed by a Korean study, which has been simultaneously published in Science. In general, the closer an earthquake sequence is located to a geothermal site and to previous related seismic activity, as well as the sooner it happens after underground operations, the greater the chance of being caused by these operations.

The mainshock and the 46 aftershocks detected between 15 and 30 November 2017 all occurred at depths of 3 to 7 kilometres. Such depths are unusually shallow when compared to previously registered natural events in the area, but cluster around the injection depth. The analysis of satellite data illustrates that the mainshock displaced the surface of the earth permanently by up to 4 cm, indicating that the activated fault (which was unknown to the research team in advance) is a steeply dipping reverse fault that passes within a few hundred metres of the injection points.

Dr Rob Westaway, Senior Research Fellow in the University of Glasgow’s School of Engineering, is one of the paper’s co-authors.

Dr Westaway said: “Our research is the first attempt to analyse how close the geological fault which slipped and caused the earthquake was to the points at which water was being injected for the hydraulic fracturing.

“This case study is important for a number of reasons. It, first, indicates what can be done to analyse an earthquake with important social consequences, using public domain data, pending release of site specific data.

“Second, this earthquake was about 1000 times larger, in terms of the energy released, than would be expected from standard theory given the volume of water injected. If it is ultimately shown to have been caused by the injection activity, the Pohang earthquake will call into question the current scaling relation as a fixed upper bound.

“Regardless of whether this earthquake is eventually shown to have been induced or not, it illustrates that the assessment of the risk of induced seismicity for deep geothermal projects is challenging, because significant faults near an injection site cannot be identified or imaged with certainty, nor do we know the state of stress on these faults. Risk assessment needs to consider these unknown faults; it is vitally important that, during the stimulation and operation of deep geothermal plants, data are collected and made available in near-real time to constantly update models for the subsurface conditions”

The evidence now available, combined, leads to the conclusion that a connection between the magnitude 5.5 earthquake and the nearby geothermal project is plausible. However, this mainshock occurred about two months after the last stimulation activities. So far, there is no quantitative model available that relates the injection activities conducted to the occurrence of this event. The Korean government has appointed an independent expert commission to examine all evidence that might indicate a connection between the injection operations and the earthquake sequence (including microseismicity data, injection volumes, reservoir pressures, and detailed hydrological and geological data) and to evaluate whether the event was triggered or induced by the nearby stimulation activities.

The paper, titled 'The November 2017 Mw 5.5 Pohang earthquake: A possible case of induced seismicity in South Korea’, is published in Science. The research was funded by the European Union’s Horizon 2020 programme and the Swiss National Science Foundation.

Link to paper in Science