The university jumped nine places in the national league table to feature inside the UK’s top 20. Glasgow scored gains in six of the nine performance indicators used to rank universities in the annual undergraduate guide, and was also shortlisted for the overall University of the Year award for the whole of the UK.

The University of Glasgow saw improvements in its rankings for graduate prospects, completion rates, teaching quality and student experience. Entry standards also rose using the new UCAS tariff system and the proportion of students graduating with a first or 2:1 went above 83%. The University of Glasgow was also top in three subject tables - for animal science, dentistry and education. 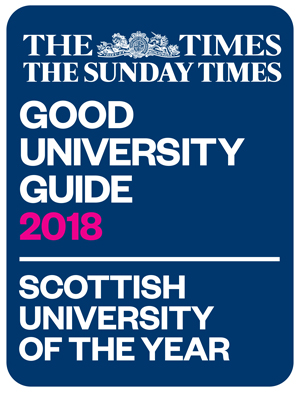 Alastair McCall, editor of The Sunday Times Good University Guide, said: "Glasgow has secured the rare double of being both Scottish University of the Year and securing a shortlisting for the UK University of the Year title. Both are well-deserved. Ranked second among Scottish institutions in our league table after a jump of nine places this year, the university is going places.

"It is in the midst of one of the biggest capital spends for a Scottish university - around £1bn over the next decade - with the redevelopment of the former Western Infirmary site, which will reshape the city's West End. It is a great example of the transformational role that can be played by universities, not just in individual lives but in communities more widely and in regional and national domains.

"It recruits internationally based on its outstanding reputation for research, and it has avoided the pitfalls of others in Scotland in being able to provide a student-centric undergraduate experience alongside that. Glasgow's success in the annual National Student Survey is no accident - and neither is its recognition in our University of the Year awards for 2018."

Professor Sir Anton Muscatelli, Principal and Vice-Chancellor of the University of Glasgow, said: “Being named Scottish University of the Year is a real tribute to the hard work and endeavour of our staff and students and underlines the commitment that we all have in providing the very best student experience.

“The award of Scottish University of the Year comes just a few weeks after Glasgow went up eight places in the Times Higher Education World rankings to 80th and as we begin work on a £1bn redevelopment and expansion of our campus in the west end of the city. The new facilities will be truly world-leading and will further confirm Glasgow as a global centre for learning, teaching and research. At the same time, we are continuing to expand our widening access programmes to ensure that, whatever a student’s background, if they have ambition and talent they will be welcome at Glasgow.”

First Minister Nicola Sturgeon said: “As an alumnus, I want to offer my congratulations to the University of Glasgow for being named Scottish University of the Year -  a great achievement by the staff and students. It is very fitting that the university’s strengths in research, teaching and graduate employability have been recognised in this way as work gets underway on its expansion plans, ensuring that the education, experience and facilities offered by Glasgow continue to lead the way not only in Scotland, but on the world stage.”

Scottish University of the Year

Kate Powell, President of the Students’ Representative Council, said: “We are so happy that Glasgow has been named as Scottish University of the year. Glasgow is a fantastic place to study, with one of the best student experiences anywhere in the UK. The SRC works hard to represent all students, and the partnership that we have with the university means that we have representation and impact at levels of decision making.”

The Rector of the University of Glasgow, Aamer Anwar, said: “This is a fantastic achievement and real recognition of the thousands of staff who work at this university and the students who have made it so. This university has been around for over five centuries. It is the fourth oldest university in the English-speaking world. This is again recognition of the fact that we are leaders. We are in the top world 100. We walk in the footsteps of giants. We have inventors; we have scientists; we have doctors; we have lawyers; we have thinkers; we have philosophers in a university that is a cultural colossus. We have people who have all led from the front and made us proud. I am delighted that Glasgow is Scotland’s University of the Year”.