Bringing superconducting single-photon detectors in from the cold

A new form of compact cooling technology developed for space astronomy could pave the way for use of advanced superconducting detectors for better cancer treatments, driverless cars and practical quantum communications.

In a Letter published in the journal Superconductor Science and Technology, researchers from the University of Glasgow and the STFC Rutherford Appleton Laboratory describe how they have developed a supercooled detector platform capable of detecting single photons.  This compact and robust platform has low enough power consumption to be used outside of a laboratory environment for the first time. 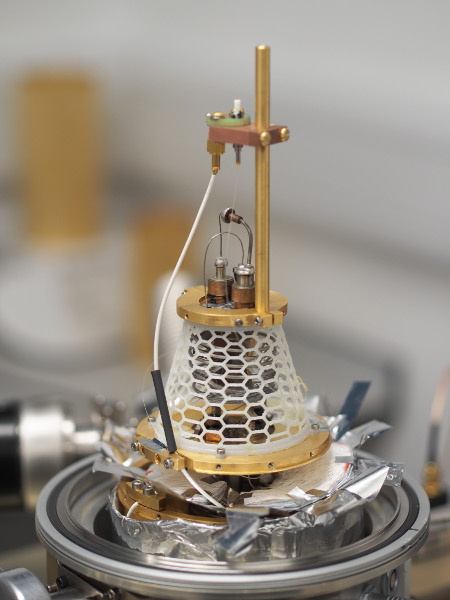 Their research builds on existing developments in extremely sensitive light sensors known as superconducting nanowire single photon detectors (SNSPDs).  SNSPDs are capable of detecting individual light quanta – photons – even at infrared wavelengths.  While SNSPDs have facilitated numerous significant advances in quantum science over the last decade, they need to be cooled to a just few degrees above absolute zero (−273.15 °C) in order to work effectively - a process which requires expensive and hazardous liquid helium, or a great deal of electrical power to achieve.

The research team from Glasgow and Rutherford Appleton labs have developed a more portable, less power-hungry platform for SNSPDs which opens up a wide range of new applications for the technology.

Nathan Gemmell, of the University of Glasgow’s School of Engineering, is the lead author of the Letter.

He said: “We’ve adapted technology initially developed for the European Space Agency’s Planck mission, which launched in 2009 and successfully surveyed cosmic background radiation in the microwave and infrared frequencies of the spectrum over four and a half years in space.

“We’ve taken a fibre-optic coupled superconducting detector supplied by the Dutch start-up Single Quantum BV and housed it in a miniaturised cooler capable of reaching temperatures of 4.2 Kelvin, or -268.95 °C, which runs from standard mains power.”

Professor Robert Hadfield, Professor of Photonics at the University of Glasgow’s School of Engineering, is the lead researcher on the project.

Professor Hadfield added: “Our Letter outlines how we’ve been able to use the SNSPD for infrared single-photon light detection and ranging, a form of distance measurement which could play a key role in the development of systems suitable for driverless cars in the future.

“We also discuss how we’ve been able to use the system to detect infrared photons at a wavelength of 1270 nanometres, the signature of a form of excited oxygen known as ‘singlet oxygen’, which plays a key role in many biological and physiological processes.

“A miniaturised cooling platform like ours would make SNSPD use in clinical PDT much more practical, potentially making cancer treatments more effective.”

Dr Cathy Foley of Commonwealth Scientific and Industrial Research Organisation (CSIRO), editor-in-chief of Superconductor Science and Technology, said: “This is a very exciting report and a genuine breakthrough. This work shows that advances in cryogenic engineering will enable superconducting quantum technologies to have decisive impact in a host of real-world applications.”

The Letter, titled ‘A miniaturized 4 K platform for superconducting infrared photon counting detectors’, is published in Superconductor Science and Technology.

Link to letter in Superconductor Science and Technology