One of the University of Glasgow’s leading researchers has received a major award in recognition of his contribution to optical physics. 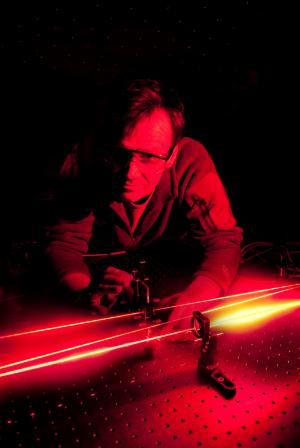 Professor Miles Padgett, the University’s Kelvin Chair of Natural Philosophy, has been named as the recipient of this year’s Max Born Award from The Optical Society.

Founded in 1916, The Optical Society (OSA) is the leading professional association in optics and photonics, home to accomplished science, engineering, and business leaders from all over the world.

The Max Born Award, which has been presented by the OSA since 1982, is named in honour of distinguished optical physicist Max Born and is presented to a person who has made outstanding contributions to physical optics, theoretical or experimental.

According to Professor Padgett’s official citation, the Optical Society chose to present him with the award in recognition of ‘contributions to optics and especially to optical momentum, including the optical spanner, the use of orbital angular momentum in communication systems, and an angular form of the Einstein-Podolsky-Rosen paradox.’

Professor Padgett said: “I’m pleased and proud to receive the 2017 Max Born award from The Optical Society. I’m joining a very distinguished group of researchers and I’m inspired to be in their company.

“As principal investigator for QuantIC, the UK’s quantum imaging technology hub, I’m also working with other talented researchers in academia and industry to bring innovative new imaging systems to market. It’s a very exciting time to be working in this field.”