Fish stress if they can’t socialise

Scientists have discovered that coral reef fish can stress and lose weight if they are separated from their mates on the Great Barrier Reef. 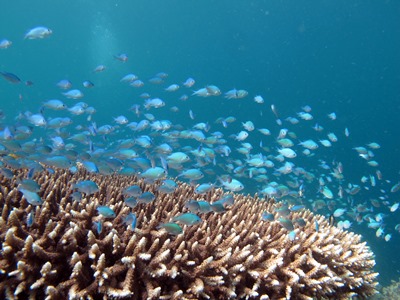 For the first time, researchers from the ARC Centre of Excellence for Coral Reef Studies at James Cook University and the University of Glasgow have succeeded in measuring the metabolic rates of individual fish in shoals to better understand why they prefer to socialise. 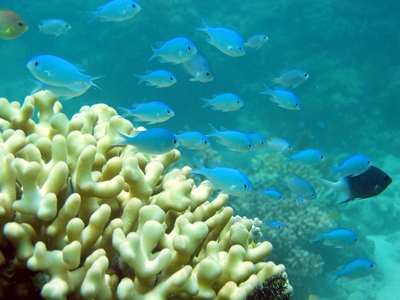 Lead author Lauren Nadler, James Cook University, said: “We have suspected that shoaling fish gain a ‘calming effect’ from living in a group. But up until now we have been unable to measure how widely spread this effect is among individuals and under what conditions it may vary.”

Her team captured shoals of the blue-green damselfish, Chromis viridis, near Lizard Island on the Great Barrier Reef. Fish were then either isolated or kept in their shoals.

Nadler added: “The fish that were isolated lost weight after the first week, which meant they were less healthy than those in groups.”

The metabolic rate (a measure of stress) of all fish was then measured both in a shoal and alone.

No matter what way the fish had been held, they were calmer and less stressed when they had their shoal-mates around, with a 26% decrease in metabolic rate compared to individuals tested alone.

Professor Mark McCormick, also of James Cook University said: “If these fish were out in the ocean by themselves, in order to stay alive, they would need more food to keep up their energy. Since they don’t have their buddies around to help look out for looming predators, foraging would be risky.

“The extra energy fish gain from shoaling is so important because it allows them to survive and reproduce and to pass on their genes to the next generation of fish.”

Dr Shaun Killen of the University of Glasgow, a co-author on the study, added: “Many animals live in groups as a way to reduce the risk of being captured by a predator or for finding food more consistently, but these results show that group-living may also have direct benefits for reducing energy use and stress.”

He added: “Many important research questions come out of these findings. For example, it would be interesting to see how changing environmental conditions, such as the disturbances associated with climate change, might exacerbate the stress experienced by social fish when they become isolated.”

One way fish can become separated from each other is through natural disturbances like tropical cyclones.

Nadler added: “When category 4 Cyclone Nathan passed over Lizard Island last year, we saw a number of blue-green pullers living by themselves on small coral colonies. They were probably separated from their group by the sheer force of the storm and currents. Those isolated fish would have been quite scared out on the reef as they wouldn’t have had their buddies to protect them.

“The results of this study indicate that these fishes probably had elevated metabolic rates which could have had a devastating impact on their overall health and condition and, ultimately, their survival.”

The paper ‘Shoaling reduces metabolic rate in gregarious coral reef fish species’ has been published in the Journal of Experimental Biology.