How the songs of Robert Burns originally sounded

The songs of Robert Burns have been stripped back to how they originally sounded, and while some will like them others may not find them easy listening. 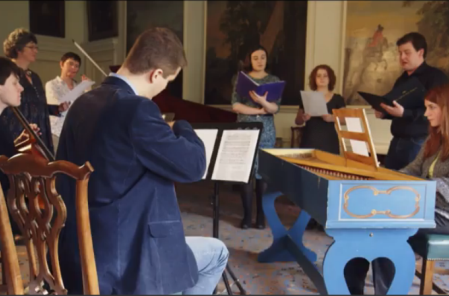 Burns’ songs are normally associated with a fiddle, guitar and accordion and often played in the back room of a pub, but the University of Glasgow has recorded them how they were originally intended by Robert Burns himself, and they sound very different.

Burns’ audience when he wrote his collections during the late 18th and early 19th centuries was a growing affluent middle class who often collected his work as a show of status.

They were in book form and often sat on shelves never played, but for those who did perform Burns’ “new” music it sounded very different to how many of his songs are performed today. Burns’ songs were tailored for the parlours of the middle classes, performed on Baroque harpsichords, cellos and violins.

Professor Kirsteen McCue, who led the research for the University’s Centre for Robert Burns Studies, explains: “People don’t really know what Burns’ songs sounded like because the songs have been taken out of context and have become what they are today which is a bit of everything. So it’s all about the context of the time.

“We have gone right back to the very first publications of those collections, which are very beautiful musical editions with music and text. They were quite expensive at the time and we wanted to explore what it would have meant for people in Burns’ day to have bought these songs.

“They were generally marketed either to be on the shelf as a repository of Scots’ songs or to be played by people in their front rooms. The piano was relatively new in Scotland. People were learning to play the piano, harpsichord and stringed instruments, so these publications were for people to have a go at playing at home.”

So, how did they sound?

However, Professor Kirsteen McCue says the recordings will not be to everyone’s taste: “We are opening up a bit of a controversial area and not everyone will like these settings, but we have not recorded them so people will like them we have recorded them because that is what they are.”

The recordings by the Centre for Robert Burns Studies involved bringing together a group of 11 young musicians and singers, some who already knew Burns songs and some who had never worked with his music before, and they were each given copies of the original publications from 1787 until the 1830s. They were then asked to build a performance from what they could read on paper.

“Working with the original publications was a new experience for a number of the musicians and it gave them a sense that music is not published like that anymore,” Professor McCue explains.

“Young musicians nowadays are not working with a printed copy like you would have found in the late 18th century, so that was a wonderful learning curve, how the text was printed and how confusing that was.

“Part of the aim was to play around with replicas of instruments from that period, to play around with what it would have sounded like with gut-stringed instruments, with harpsichord, with an early piano and early guitar. So it does sound very different and that is something which can be unattractive for the vast majority of Burns lovers who just want the melody, they just want a singer with a fiddle and the songs work beautifully that way, there’s no denying often they work best that way but that’s not how they originally appeared.”

The Burns’ recordings marks the end of a 5 year funded project by the ARHC called ‘Editing Burns for the 21st Century’ and the funding has under pinned the first four volumes of the new Oxford Edition of the works of Robert Burns, edited by Gerry Carruthers Co-Director of the Centre for Robert Burns Studies at the University of Glasgow.

Professor Gerard Carruthers, commenting on the recordings, said: “We've always intended with the songs of this edition to foreground performance as well as print.

“The new recordings are intended to be enjoyed and also to make people think about Burns' music in its own day as well as its legacy. Burns was always open at the same time to tradition and innovation, and that is the spirit that has informed all the recordings on our website that form part of the work of ‘Editing Robert Burns for the 21st Century’ and the Oxford Edition of Robert Burns.’