There continues to be concern about the long term effects of concussion and repeated concussion in athletes, including boxers and rugby players who may sustain several concussive injuries throughout their career. 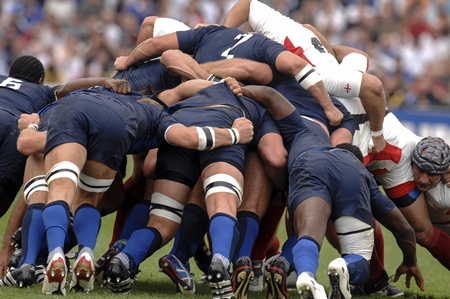 However, evidence on the long term health and wellbeing of athletes and retired athletes is limited.

A study, at the University of Glasgow, has now looked at the health of 52 retired Scottish male International rugby players and found that they only displayed some mild memory effects in contrast to the 29 ‘control’ volunteers – even although the retired rugby players sustained an average of 14 self-reported concussions each.

The study, which is published today in the Journal of Neurology, Neurosurgery and Psychiatry, revealed that despite multiple concussive injuries in the retired rugby players there were not significant effects on daily life overall. Cognitive test results in the retired rugby players and the controls found few differences; the retired players performed less well on a test of verbal learning and on another test of fine co-ordination of the dominant hand, but these effects were mild.

The research also found that there were no “significant associations” between the number of concussions and the participants’ performances on cognitive tests.

Professor Tom McMillan, Professor of Clinical Neuropsychology from the Institute of Health and Wellbeing, said: “Despite a high number of repeat concussions in the retired rugby players, effects on mental health, social or work function were not evident some twenty years after they had stopped playing.

“Overall there is not a suggestion of widespread decline in daily function in ex-rugby internationalists who had a high number of repeat concussions. Although some differences in memory were found, these were mild overall and their cause uncertain.”

The study, 'Long-term health outcomes after exposure to repeated concussion in elite level: rugby union players' is published in the Journal of Neurology, Neurosurgery and Psychiatry. The study was funded by the Sackler Foundation, the Chief Scientist Office and an NHS Research Scotland Career Researcher Fellowship.