The First Minister, Nicola Sturgeon, has announced that Professor Anton Muscatelli, Principal and Vice-Chancellor of the University of Glasgow, will chair a group of experts to advise the Scottish Government on securing Scotland’s relationship with the EU. 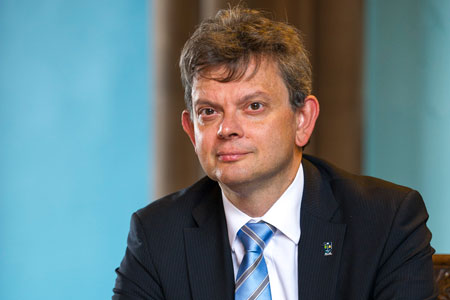 The First Minister made the announcement during a statement to Parliament on the outcome of the EU referendum.

Ms Sturgeon said: “The Scottish Government’s over-riding objective is to protect Scotland’s relationship with and place in the European Union. The Standing Council on Europe will provide advice on how best to achieve those objectives.

“More than 60% of voters in Scotland wanted to stay in the EU to protect the jobs, investment and trade that depend on it. We chose to be an open, inclusive and outward-looking society where other EU citizens are welcome to live, work and contribute, and we voted to protect the freedom and prosperity that comes with our rights to travel, live, work and study in other European countries.

“We now need to set out and evaluate all the impacts of the referendum result and all of the options open to Scotland to secure our relationship with the EU. The Council draws on a breadth and wealth of knowledge and experience, comprising specialists with backgrounds in business, finance, economics, European and diplomatic matters, and it will encompass a range of political and constitutional opinions.

Commenting on his appointment Professor Muscatelli said: “I am honoured to have been asked to chair this important group. The Brexit vote has created great uncertainty. The expert panel brings together talented individuals from diverse backgrounds and perspectives who will offer advice to the Scottish Government on a range of issues in the crucial weeks and months ahead.”

Membership of the Standing Council will be flexible to ensure Ministers have access to appropriate advice as required.