An international team of scientists has announced a belated Christmas present for the world of astronomy as it confirms the detection, on Boxing Day 2015, of gravitational waves from a second instance of two black holes colliding.

This latest finding opens the door to an exciting new age of gravitational astronomy.

The dawn of a new era

Unlike the discovery observation from September 2015, where the spin of the black holes could not be reliably measured, in the "Boxing Day" binary at least one of the black holes is definitively confirmed to be spinning. This latest discovery transforms the work of the LIGO project from simply detection to now marking the beginning of Gravitational Astronomy as an observational field.

“We know from this second detection that the properties being measured by LIGO will allow us to start to answer some key questions with gravitational astronomy. Mysteries still to be explained include: how do such black hole systems form? In future we'll study this through cosmic history aiming to fill in the 'missing links' in our knowledge,” said Professor Sheila Rowan, Director of the University of Glasgow’s Institute for Gravitational Research, and a member of the discovery team.

This new discovery came on December 26, 2015 at 03:38:53 UTC (GMT), when the gravitational waves were detected by both of the twin Laser Interferometer Gravitational-wave Observatory (LIGO) detectors, located in Livingston, Louisiana, and Hanford, Washington, USA. 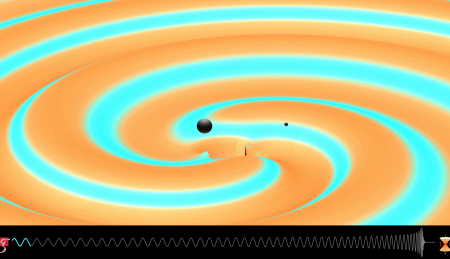 During the merger of the black holes, which occurred approximately 1.4 billion years ago, roughly the equivalent of the mass of the sun was converted into gravitational waves. This second detection suggests that in future we may see many of these binary black hole (BBH) systems, with Advanced LIGO, and with future detectors of increasing sensitivity. This paves the way for the start of cosmology with Gravitational Wave signals – aiming to use a totally new way to probe the mysteries of the expansion of our Universe.

Professor Graham Woan, of the University of Glasgow’s Institute for Gravitational Research said: “These new signals not only map out the final second of action before two black holes collide, they also reveal how at least one of the black holes was spinning - a crucial factor in determining how they were formed in the first place. We are expecting to learn a great deal more from the next observing run of these telescopes, and can hardly wait.”

The discovery, accepted for publication in the journal Physical Review Letters, was made by the LIGO Scientific Collaboration (which includes the GEO Collaboration and the Australian Consortium for Interferometric Gravitational Astronomy) and the Virgo Collaboration.

Gravitational waves carry unique information about the origins of our Universe and studying them is expected to provide important insights into the evolution of stars, supernovae, gamma-ray bursts, and neutron stars in addition to black holes. However, they interact very weakly with particles and require incredibly sensitive equipment to detect and this can only be done using a technique called laser interferometry.

Each LIGO site comprises two tubes, each four kilometres long, arranged in an L-shape. A laser is beamed down each tube to monitor very precisely the distance between mirrors at each end. According to Einstein’s theory, the distance between the mirrors will change by a tiny amount when a gravitational wave passes by the detector. A change in the lengths of the arms of close to 10-19 metres (just one-ten-thousandth the diameter of a proton) can be detected.

The University of Glasgow’s Institute for Gravitational Research led on the conception, development, construction and installation of sensitive mirror suspensions in the heart of the LIGO detectors, crucial to these first observations. Those suspensions rely on delicate 400-micron-wide fibres made from silica. Despite their fragility, each suspension fibre is very strong, capable of holding up to 70 kilograms. In the LIGO detectors, the mirror suspensions hold 40kg mirrors and keep them from being interfered with by any outside force or vibration except for gravitational waves.

That technology, developed in partnership with the University of Birmingham, the University of Strathclyde, and the STFC Rutherford Appleton Laboratory, was based on Glasgow’s pioneering work for the UK/German GEO600 detector.

SXS collaboration: an animation of the black holes orbiting each other at the top; the middle shows the gravitational wave strain signal at Earth, and the bottom plot shows the frequency of the orbit against time, counting down to the point at which the black holes merge

In recent months the LIGO project has received recognition for its achievements from around the world. On May 3, the Special Breakthrough Prize in Fundamental Physics was awarded to the international team responsible for the detection of gravitational waves and this was closely followed by the announcement of the award of the Gruber Cosmology Prize on May 4.

The news of a second detection follows the announcement earlier in June from the European Space Agency’s LISA Pathfinder mission that it has successfully demonstrated technology needed to build a future space-based gravitational wave observatory, partly thanks to substantial research and engineering support from UK scientists from the Universities of Glasgow, Birmingham and Imperial College London.

Over the coming years, the Advanced LIGO detectors will be ramped up to full power, increasing their sensitivity to gravitational waves, and in particular allowing more distant events to be measured. With the addition of further detectors, initially in Italy and later in other locations around the world, this is just the beginning of gravitational astronomy. Scientists from the University of Glasgow are developing techniques to detect and analyse gravitational waves from sources such as pulsars and supernovae, as well as working on tothe design and development of future generations of gravitational wave detectors.

Professor Jim Hough, Associate Director of the University of Glasgow’s Institute for Gravitational Research, said: “Improving detector sensitivity is both a challenging and exciting goal. Over the next decade we look forward to this delivering a wealth of new astronomical information. Exciting times to come!”