The University’s relationship with UESTC in Chengdu, China, has been celebrated with the official opening of the new UESTC Student Centre, based at the University of Glasgow’s James Watt Building. 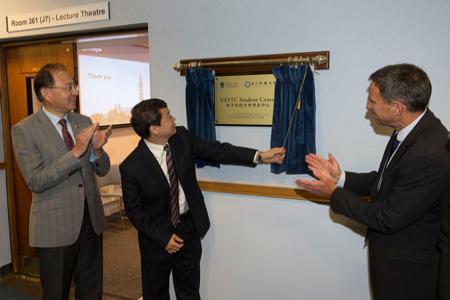 The formal ceremony was attended by senior figures from both partner universities and by Mr Pan Xinchun, Chinese Consul-General for Scotland.

The Student Centre comprises a learning and teaching hub with state-of-the-art IT facilities to support interactive learning together with an informal study area decorated with a Chinese flavour. The area will continue to be available to other students with its decoration emphasising the School of Engineering’s strong links with China.

The University of Glasgow and UESTC (University of Electronic Science and Technology of China) have had a Joint Education Programme, based at UESTC’s Qingshuihe campus in Chengdu, since 2013. Now the two Institutions have established a Joint Education Institute (JEI) in Chengdu; it will be known in future as the Glasgow College UESTC. The new UESTC Student Centre, at the University of Glasgow, is an important milestone in the two universities’ collaborative working, and will be a focus for UESTC students attending summer schools in Glasgow as well as a growing number of students studying in both Chengdu and Glasgow on a 2+2 programme.

In 2013, the first year of the joint UofG-UESTC programme, 140 students were admitted to study dual degrees in Electronics and Electrical Engineering. This year, the Ministry of Education in China approved an increase to 540 students per year and both parties are committed to growing admission numbers to 900 per year.

Professor John Marsh, Dean of the University of Glasgow-UESTC Partnership, said: “The Ministry of Education in China envisages that this JEI will be seen as a model for collaboration in Higher Education between the UK and China and that it will become a showcase activity with a ‘national profile' in both countries.

“It is expected to be of a substantial size, with a total of 3,400 students in the steady state. In addition to the educational and cultural benefits from bringing together the best aspects of the UK and Chinese education systems and student experiences, this JEI will contribute at least £120m over 10 years to each of the UK and Chinese economies, and directly support up to 30 new academic jobs in the UK. It will also be the nucleus for cutting edge research between UESTC and the University of Glasgow.”

Professor Zhu Hong, Vice-President of UESTC, who carried out the formal plaque unveiling, welcomed the growing collaboration between the two universities. He said that three ingredients were necessary for UESTC’s success: government support, the support of friends, and the university’s own efforts.

“We consider our colleagues from the University of Glasgow as very, very good friends now,” he added.

Both universities encourage students in the Glasgow College UESTC to spend some time studying in Glasgow. A 2+2 programme linked to the College was initiated in 2015 with two students coming to Glasgow for their final 2 years of study. This September, 16 students will take part and in future, it is expected to attract up to 140 students per year.