A celebratory topping-out ceremony took place today for the new University of Glasgow £16m Imaging Centre of Excellence (ICE) building on the grounds of the Queen Elizabeth University Hospital.

This ground-breaking new centre, supported by the NHS and funded by the UK Government and the Medical Research Council (MRC) as part of the Glasgow City Region City Deal, will provide world-leading clinical research facilities and provide a hub for academic, scientific and NHS clinical expertise into brain imaging in diseases such as stroke, dementia and brain tumours. 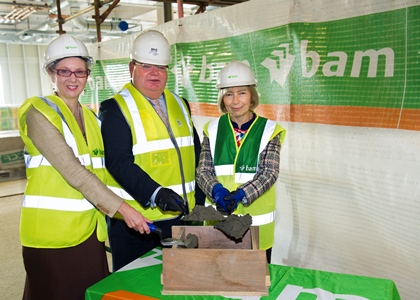 Most notably, the building will contain a £10 million 7 Tesla MRI scanner, an ultra-high resolution scanner which will be the first of its kind in Scotland and one of the only 7T scanners on a clinical site in the world. ICE is expected to generate up to 400 new jobs and add nearly £85 million for the local economy over the next ten years.

Celebrating the progress made on the construction of the building, which is expected to be completed by the end of this year, Professor Dame Anna Dominiczak, Vice Principal and Head of the College of Medical, Veterinary and Life Sciences at the University of Glasgow, said: “I am delighted at the speed in which the construction of the ICE building has progressed.

“This building is the physical representation of a very successful collaboration between the University of Glasgow, Glasgow City Council and NHS Greater Clyde and Glasgow. The creation of this internationally competitive centre incorporating NHS, academic and industry partners will maximise and facilitate the economic impact from the clinical research excellence at the QEUH.”

“I would like to take this opportunity to acknowledge and thank the people involved in the planning, design and construction, without whom this project would not have been possible.”

Companies involved in the construction of the ICE building include bmj architects, BAM Construction, Hulley & Kirkwood, Arup and Currie and Brown.

Robert Calderwood, Chief Executive of NHS Greater Glasgow and Clyde, added: “The opening of the new ICE building will offer us the provision of four state of the art theatre suites with full ancillary accommodation which will be utilised by the Department of Neurosurgery and Oral Maxillofacial Surgery, providing the opportunity to thereafter refurbish the existing four theatre suite.

“This is the latest in a line of joint NHS and University of Glasgow College of Medical, Veterinary and Life Sciences joint projects which have seen the provision of one of the largest grouping of clinical research facilities in Scotland, if not the UK.”

"The City Deal will not only deliver tens of thousands of jobs and massive infrastructural improvements over the next few decades, but also continue the City Region’s rise as a leader in innovative industries such as life sciences, advanced design and manufacturing and new technologies.”