A spin-out company launched nearly six years ago by the University of Glasgow has been acquired by the California-based company Synopsys Inc., a global leader in electronic design automation (EDA) and semiconductor IP, and the world’s 15th largest software company.

Gold Standard Simulations Ltd (GSS) was set up in 2010, with £720,000 seed funding and ongoing commercialisation support from Scottish Enterprise, to commercialise more than 20 years of research in modelling and simulation of advanced transistors and circuits for semiconductor microchips. GSS specialises in predictive physical simulation of performance and atomic scale transistor variability, and statistical “compact” models for circuit simulation. 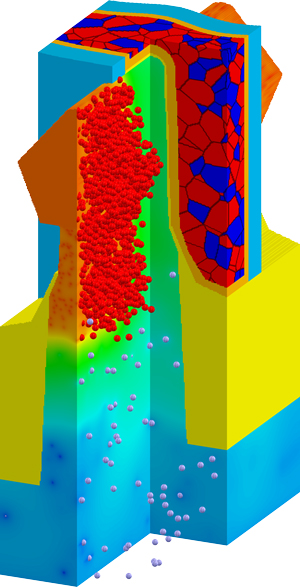 GSS has developed a highly automated tool chain that enables design technology co-optimisation (DTCO), helping the semiconductor industry to reduce time and cost when developing next-generation semiconductor process technologies and corresponding circuits and systems. This has become increasingly important due to the broadening of technology options, increasing complexity of transistor and circuit operations and the need for technology tuning for particular commercial applications.

GSS was created by Professor Asen Asenov, James Watt Chair in Electrical Engineering in the College of Science and Engineering, with support from the University and Scottish Enterprise; Professor Asenov is one of the world’s leading device modelling experts and the leader of the acclaimed Glasgow Device Modelling Group (DMG).

Professor Asenov said: “We are delighted that the GSS vision and technology can be brought to the next level by the best and the brightest player on the EDA arena amplifying its impact on the semiconductor industry. The GSS team, which will be incorporated into the Synopsys technology CAD (TCAD) group and will remain in Scotland, provides jobs for University of Glasgow PhD students and former Post-Doctoral Research Associates (PDRAs) - all of whom are former members of the DMG.”‌‌

In a statement, Synopsys Inc. said it has completed the acquisition of GSS, a “leading provider of TCAD and EDA simulation solutions for design technology co-optimisation (DTCO) of advanced process nodes”.

According to Synopsys: “The acquisition of GSS supports the Synopsys TCAD strategy to offer a comprehensive solution to reduce development time and cost for advanced node development by enabling the evaluation and selection of process, device and materials options in the pre-wafer research phases of development. The terms of the deal, which is not material to Synopsys financials, are not being disclosed.”

David Smith, director of technology and engineering at Scottish Enterprise, said: “Having provided seed funding and commercialisation support from the beginning, we are proud to have been part of GSS’s impressive journey from concept to delivery of its world-renowned and pioneering TCAD technology. This transaction highlights both the talent of the company’s founders and the capabilities which Scotland can offer the global semiconductor industry.

“We congratulate both GSS and Synopsys on this exciting deal, which will retain this ground-breaking international technology and intellectual property in Scotland, while helping both companies to grow and capitalise on the opportunities it presents."

Professor Jon Cooper, Vice-Principal of Knowledge Exchange and Innovation, said: “We welcome the acquisition of GSS by Synopsys and look forward to continuing to grow the close interaction between the company and the University on a variety of collaborative R&D programs.”

Professor Neal Juster, Senior Vice-Principal and Deputy Vice-Chancellor, added: “This is a great achievement for Professor Asenov and recognition of the commercial significance of his many years of research which GSS has been exploiting. We look forward to developing a strategic relationship with Synopsys.”