New book shines light on Scots and the Easter Rising

The role Scots played in Ireland’s 1916 Easter Rising is the focus of a new book being launched tomorrow to mark the centenary.‌‌‌ 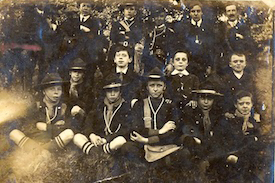 'Scotland and the Easter Rising', edited by Professor Willy Maley and Kirsty Lusk, from the University of Glasgow, focusses on key figures from Scotland who supported the republican movement, including Edinburgh-born James Connolly, one of the Easter Rising leaders, and Margaret Skinnider, from Coatbridge, who smuggled explosives to Dublin and participated in the fighting.

The book brings together writers, journalists and academics to reflect on the part played by Scotland in the 1916 Rising and its many legacies.
It was a defining moment in Irish history, laying the foundations of the nation. But 1916 is also a key moment in history for Scotland, for the Irish population living in Scotland and the aftermath which helped shape Irish-Scottish relations. These aspects are the focus of the book.

James Connolly, who was born in the Cowgate area of Edinburgh to Irish immigrant parents, was Commandant General of the Republican forces during Easter Week 1916 and was a signatory to the Proclamation of the Irish Republic.

When the Rising eventually failed Connolly, who was seriously injured in the fighting, was rounded up with others and executed by a British firing squad.

Margaret Skinnider, a schoolteacher and suffragette, born in Coatbridge, Lanarkshire, is another republican sympathiser who features heavily in the book. She served as a scout, despatch rider, sniper and raider in the Rising.

Margaret Skinnider was the only female combatant injured in action during the battle and wrote about the importance of the Rising for the suffragist and socialist movements.

Professor Willy Maley, co-editor of the book and professor of English Literature at the University of Glasgow, said: “There has been very little proper acknowledgement of James Connolly's Scottishness, neither has much been written about the life of Margaret Skinnider and so many others like her who hailed from Scotland and felt the need to join the Rising.

“This book is the first time so many of Scotland's finest writers and journalists and Irish studies experts have come together to reflect in hopefully a balanced way on the Rising, and that is why I think it is a pioneering book.

“Among the contributors was leading Herald journalist and great nephew of James Connolly, Ian Bell, who died so suddenly and sadly far too young. Ian was passionate about this moment in Irish and Scottish history and was very much involved in the creative process of this book.

“Add in writers like James Kelman, Alan Bissett, Des Dillon, James Kelman and Irvine Welsh, alongside other major journalists and broadcasters like Billy Kay, Kevin McKenna and Peter Geoghegan, and academics from the Universities of Glasgow, Edinburgh, Nanyang, Sunderland and Stirling, all wrapped up with an important afterword by leading historian Owen Dudley Edwards and you have something pretty special. It is an exceptional book among many that will be marking the centenary of 1916.”

Professor Willy Maley and Kirsty Lusk will be launching the book, published by Luath Press, at a literary event at Celtic Connections, in Glasgow, tomorrow (January 15). The evening, held in association with Celtic Connections and the the Aye Write! Glasgow's Book Festival, will be held in the Royal Concert Hall, at 5pm.

The book will be dedicated to the memory of Herald journalist and writer Ian Bell.