An international team of scientists has announced a new advance in the fight against Alzheimer’s disease by identifying a new drug target for not only improving symptoms of brain degeneration – but also to extend the life-span of the terminally ill mice.

The four-year study by Medical Research Council (MRC) scientists based at the MRC Toxicology Unit at the University of Leicester is published in the Journal of Clinical Investigation. The study was led by Professor Andrew Tobin alongside colleagues from pharmaceutical company Eli Lilly and Company and the Monash Institute for Pharmaceutical Sciences in Australia. The project was also partly supported by the Wellcome Trust. 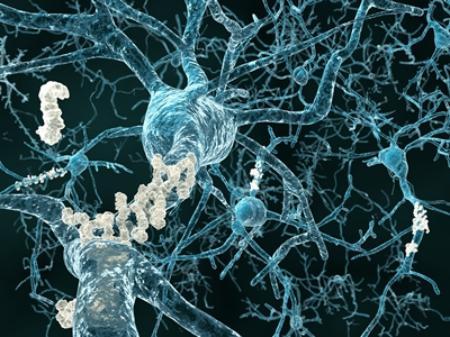 Corresponding author Professor Tobin, who alongside the lead researcher Dr Sophie Bradley has since moved from the University of Leicester to the University of Glasgow, said: “The paper describes drug-like molec‌ules that can restore memory loss and slow progression of prion neurodegenerative disease in a manner that relates to the potential of these drugs in human Alzheimer’s disease.

“We have treated mice with a new class of drug, and found that these drugs can not only improve symptoms of brain degeneration, such as cognitive decline, but can also extend the life-span of these terminally-sick mice.”

The researchers state that drugs which activate this protein receptor in the brain have previously been tested in clinical trials for Alzheimer’s disease, and showed positive results with respect to improving cognition, but the patients experienced a large number of adverse side effects. This new class of drug is more selective and does not cause any side-effects when administered to mice in the study.

The study authors believe that this offers hope in the design of new drugs for improving cognition and extending life span.

Professor Tobin said: “This work may provide important information as to whether this protein is a viable drug target in the treatment of diseases associated with the progressive death of brain cells. This is of great importance to society, based on the fact that the treatment options for Alzheimer's disease are very limited – there are no cures for Alzheimer’s disease and current treatments are focused on relieving some of the symptoms.

“What we have found is a novel class of drugs, called allosteric ligands, that target a protein called the M1 muscarinic receptor, which is present in the brain. Activating this receptor protein can not only improve cognitive function in mice with progressive brain degeneration, but when administered daily, can extend life span.”

The scientists say the work is important because it focuses on identifying a treatment that not only improves symptoms associated with neurodegeneration, like current treatments, but also identifies a new strategy for slowing disease progression and extending life-span.

Professor Tobin said: “Alzheimer’s disease is the most common form of dementia, and it affects an estimated 850,000 people in the UK alone. There are no treatments that can slow or halt the progression of Alzheimer’s, and patients are treated with drugs which temporarily mask the symptoms of the disease. Often these treatments are associated with side-effects which can limit patient compliance.

“I am proud to be involved in a collaboration with researchers across the world to address one of the world’s major healthcare challenges. Our study opens up avenues for researchers to look at new drugs that treat the symptoms of Alzheimer’s and also slow disease progression.”