A University of Glasgow biomedical engineer has been awarded an honorary doctorate from a Swedish university.

Elizabeth Tanner OBE, Professor of Biomedical Materials in the University’s School of Engineering, is one of three recipients of an honorary PhD from Lund University’s Faculty of Medicine. 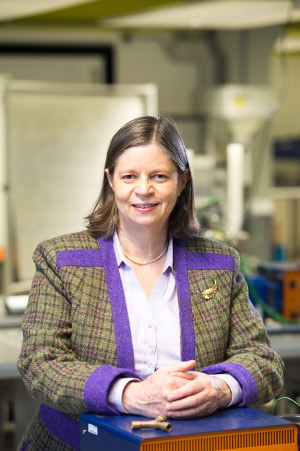 Alongside Professor Tanner, Lund University also named Dame Frances Ashcroft of the University of Oxford and former Swedish diplomat Göran Bundy as recipients of honorary doctorates within the Faculty of Medicine. They will be officially presented with their doctorates in Lund Cathedral on June 2, 2017.

Professor Tanner joined the University of Glasgow in 2007. Her research, which bridges the gap between engineering and medicine, is focused on the development of bioactive materials for bone augmentation and replacement, with funding support from the children’s charity Action Medical Research and Medical Research Scotland as well as the UK Research Councils.

Professor Tanner’s connection with Lund University began in 1998, where she was initially appointed as part-time co-head of the Biomechanics laboratory, then as a guest professor, and currently as Hedda Anderson Visiting Professor. Her thorough knowledge of the body's supporting tissue and orthopaedic biomaterials has been important for the University of Lund in both basic research and clinical application.

Professor Tanner said: “I’m pleased, proud and honoured to have been awarded an honorary doctorate from Lund University, with whom I have enjoyed a long and rewarding partnership. I also appreciate that this is from the Faculty of Medicine showing the importance of applying my engineering research to the clinical field.

“I’m very much looking forward to formally accepting the award next year and continuing to build research links between Sweden and Scotland.”

Lars Lidgren, emeritus professor of orthopaedics at Lund University, said: “Elizabeth Tanner has successfully established and led the boundary-spanning collaboration between engineering and medicine. She has actively contributed to the research in bone and joint diseases, helping Lund University take a leading position internationally.”