New Court of Session papers, missing for more than 200 years, have been unearthed by the Faculty of Advocates and Professor Gerard Carruthers, University of Glasgow.

The newly found papers shine light on Thomas Muir and how he courted controversy in his early years, which may have contributed to his treatment by the justice system in later life.

Previous biographers of Muir had assumed the papers were long lost. But, with the help and expertise of Professor Gerard Carruthers, Francis Hutcheson Chair of Scottish Literature, an expert on Thomas Muir, the papers were found in the Advocates’ archives and feature in a new book to be launched this week.

With the help of two knowledgeable lawyers, the missing papers, over 80 pages which deal with Muir, were located in sets of files that would have been unrecognizable to most Muir enthusiasts.

Professor Gerard Carruthers, commenting on the finding of the lost papers said: "I just think people had just been looking in the wrong place. They had perhaps been looking under Thomas Muir rather than looking under the Campbell papers or the Dreghorn papers.

"I think partly the reason why these papers were overlooked was because they didn't deal with the 1790s trial where Muir is sentenced to 14 years in Botany Bay. 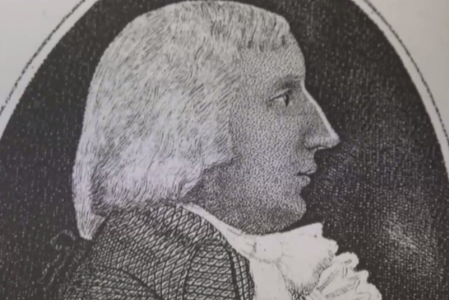 "These papers dealt with an earlier period when he is involved in local kirk politics. But the real significance of these papers is they show that he was a well kent face, and the same people who are sitting in judgement on him in Edinburgh in 1793 just a few years earlier were aware of Thomas Muir making trouble as a representative of his local church."

The papers detail a well-known chapter in Muir's early life while representing Cadder Kirk, when he challenged local and powerful land owners, contesting their right to choose a church minister.

The Court of Session papers show how Thomas Muir upset powerful key members of Scotland's political and legal establishment, including key figures who were later instrumental in having him banished to Botany Bay in his infamous sedition trial of 1793.

Over eighty pages of this new material bring into focus Muir’s activity representing his local kirk congregation at Cadder in today’s East Dunbartonshire, in the period 1790-92. 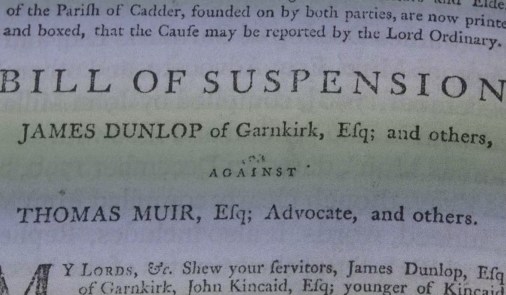 They show the minutiae of Muir’s opposition to James Dunlop of Garnkirk, a local land owner who wished to control the appointment of a minister for the parish rather than allow the congregation to have a free hand in appointment. Although the preferred candidate of the congregation represented by Muir eventually secured the appointment, what the Court of Session papers show is that Muir lost the case, contradicting the usual biographical account.

Commenting on the Court of Session papers, Angela Grahame, QC, Vice-Dean of the Faculty of Advocates, said: “The Advocates Library is a treasure trove of fascinating, historical documents.

“We are delighted that the vast amount of published information which we preserve has provided a telling contribution to this book and to a new insight into the man who holds such a prominent place in Scottish history and culture.”

Thomas Muir was not afraid to challenge the system. He was used to taking on the "establishment". He was an 18th Century political reformer, who in another controversial episode voluntarily expelled himself from the University of Glasgow in 1785.

Regarded by many as the ‘Father of Democracy’ the Bishopbriggs lawyer refused to apologise after he campaigned for the reinstatement of John Anderson (University of Strathclyde), who had accused the then principal and faculty members of mismanaging funds. Muir subsequently expelled himself.

He later campaigned for political reform, demanding greater democratic rights for the people. This angered the political establishment, seeing him as a ring leader, and they tried him for sedition in 1793. Muir was found guilty and banished to Botany Bay, Australia, for 14 years, but the trial was widely regarded as a fix. He escaped from Australia two years later and fled to France, calling on the French Government to “liberate Scotland” but he died two years later.

Thomas Muir of Huntershill: Essays for the Twenty First Century examines many aspects of the lawyer’s life including his trial, his relationship to Australia and to France, as well as his political ideas, his relationship to the Scottish Enlightenment, his days as a student activist at the University of Glasgow and his part in Scottish ecclesiastical politics.