One of The Hunterian's "greatest treasures" goes on public display today for the first time, in a new UK touring exhibition ‘Skeletons: Our Buried Bones’. 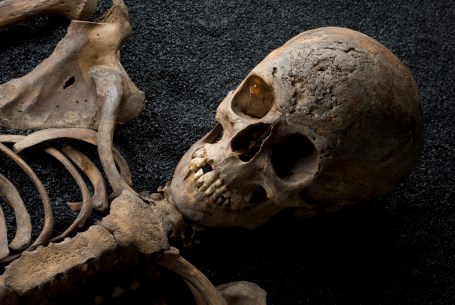 The 5,000 year old British Neolithic skeleton of a woman, unearthed on a beach in Tiree in the early 20th Century, has never been seen in public before.

The skeleton forms part of a collaborative exhibition at the Hunterian Art Gallery, unearthing the stories behind the skeletons - and includes a selection from the Museum of London’s 20,000-strong collection.

On display together for the first time at The Hunterian, the eight skeletons reveal rich and eventful life stories, with individuals coming from diverse locations, backgrounds and periods of time, from the plague pits of urban London, burial grounds across Scotland and from the beaches of South Uist.

The Hunterian Art Gallery is the first stop on the UK-wide tour of the exhibition, a collaboration between Wellcome Collection and the Museum of London. The exhibition tours Glasgow, Bristol and Leeds until 2018.

Using the latest scientific methods, careful analysis by experts has provided insights into the health and history of each individual, bringing to life stories that have long been hidden beneath the ground. Each skeleton exhibits pathologies that expose the multiple challenges of life in the past, from fractures and trauma, cancer and the effects of syphilis, to rickets, arthritis and tooth decay.

Research has also shed new light on the grounds they were discovered in and the circumstances in which they were buried.

Professor David Gaimster, Director of The Hunterian, said: "We’ve got a fantastic spectrum of skeletons from around Scotland and the British Isles and this is the first time The Hunterian has done an exhibition around bio-archaeology, and it’s very exciting for us to showcase latest research techniques in the study of human skeleton remains.

"We are really pleased on this occasion that we are able to bring one of our great treasures of The Hunterian into the gallery for the first time. This was a skeleton which was excavated in the early 20th Century on Tiree in the Inner Hebrides and this skeleton is a female from the British Neolithic period, over 5,000 years ago.

"She’s very well preserved, she was buried in the beach on Tiree, she suffered from congenital rickets, so she suffered from various episodes of malnutrition. There are lots of interesting theories such as why in this open landscape on the coast did she not get enough light, why was she covered up?

"We’re very delighted to bring this skeleton to the exhibition. It’s the first time it’s ever been exhibited and I would argue it is one of our greatest treasures.”

Among the Museum of London skeletons on display is an adult Roman male who was discovered to have multiple myeloma, a type of blood cancer and a Medieval male aged between 36-45 years old, from the Black Death catastrophe cemetery, East Smithfield who, although likely to have died from plague, had an arrowhead lodged in his spine.

The Scottish collections also include a late Medieval skeleton, possibly a murder victim, unearthed from Perth’s Horse Cross cemetery and on loan from Perth Museum and Art Gallery.

‘Skeletons: Our Buried Bones’ opens at The Hunterian Art Gallery today, August 19, and runs until January 8. Admission is free.