Scientists have tracked the behaviour of seabirds migrating across the Atlantic to better understand how these animals use the marine environment and find out where they might come into conflict with human activities. 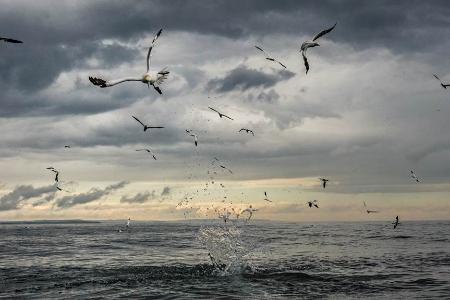 In a new study, published today in Biology Letters, research led by the Universities of Glasgow and Exeter has found that the Canary Current, a wind-driven ocean upwelling off the west coast of Africa, is a key hotspot for migrating seabirds.

The Canary Current is known to be a globally important biodiversity region, and also one of the most intensively fished areas on earth. This upwelling brings nutrient rich water from global currents to the surface, which attracts a range of wildlife including fish and birds.

Although scientists have long suspected that upwellings such as the Canary Current are important for seabirds, until now there has been little information on where the birds come from and how long they spend there.

The researchers used miniaturised loggers to follow seven different species of seabirds across the Atlantic including northern gannets and lesser black-back gulls from the UK, to reveal why these migrating birds choose to spend time in this area.

The data has revealed that the birds were drawn to areas with a specific surface temperature, of between 15 and 20 degrees Celsius, and waters were there was nutrient rich chlorophyll at the surface.

Dr James Grecian, University of Glasgow, said: "Marine animals can move many thousands of kilometres when migrating, making conservation challenging. These findings improve our understanding of how animals use the marine environment and where they come into conflict with human activities."

The seabirds were tracked using miniature tags attached to their legs. The tracking showed that the majority of the birds visited the Canary Current, and that it was an area of high biodiversity.

“Also, our work would not have been possible without a multi-national collaboration; we hope to see more, not fewer, cross-border research projects in future.”

The authors also hope that by highlighting the importance of the Canary Current to a range of migratory seabirds, it will encourage more conservation strategies in the region.

Dr Grecian said: "The Canary Current is an area undergoing huge change at the moment, and is the focus of some of the most intensive fishing activity globally. Our findings demonstrate that it is also an important biodiversity hotspot. However, industrial fishing practices threaten these animals with the risk of being caught or killed as fisheries bycatch and by competing directly for their food.

"So while we show what drives marine biodiversity in this region, we also hope is that by highlighting this area as important we can encourage its conservation."