The risk of developing a mental health problem among people who have served in the Armed Forces is greatest in veterans who have served for the shortest period of time and becomes less with longer service, according to a study by the University of Glasgow.

Mental health outcomes in serving personnel and those who have recently left the services have been studied extensively. Previous research found that overall, military personnel were more likely to have a mental health problem than people who had never served, and it is widely believed that combat is the biggest risk factor. It is also known that people who leave service before completing their minimum engagement are at higher risk. 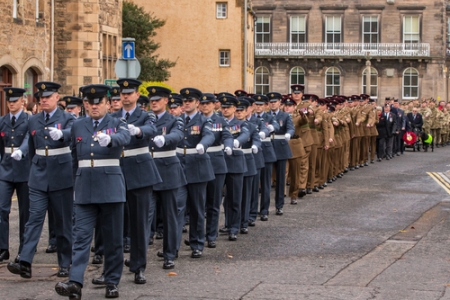 This new study analysed the long-term risks of admission to hospital for common mental health problems - including depressive disorders, anxiety disorders (including Post-Traumatic Stress Disorder) and psychotic illness - in veterans by length of service. The researchers found that those who left earliest had a 50% higher risk than people with no record of service: that also included people who left before completing training. Longer service was associated with better mental health outcomes; people who completed at least four years’ service were at no greater risk than civilians, whilst people with the longest service had a 40% reduction in risk.

Lead researcher Dr Beverly Bergman said: “This is an important study which has confirmed that although there was an increased risk of developing mental illness in military veterans, it was highest in people who left before they finished their initial military training. These individuals cannot have been deployed or seen combat. We believe that pre-service vulnerabilities contribute to both early separation from service and long-term mental health problems. In this study longer service, which often means more deployments, was associated with better mental health in most veterans.”

The study, which used data from the Scottish Veterans Health Study to examine rates of hospital admission and day care for mental health disorders, is published in The Journal of Clinical Psychiatry.