It is often said that the Inuit have 50 different words for snow but researchers at the University of Glasgow have discovered that the Scots have even more. 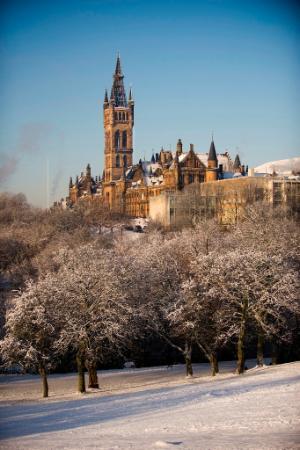 Researchers cataloguing different Scots words for the white stuff have officially logged 421, including the most obvious “snaw” but also “sneesl” to begin to rain or snow, and “skelf” a large snowflake.

The words will all be featured in a new Scots thesaurus, the first part of which will be published online this afternoon (Wednesday 23 September).

The study by the University of Glasgow is part of an AHRC-funded pilot project to compile the first ever Historical Thesaurus of Scots (HTS), classifying every word in the Scots language from earliest records to present day. The new thesaurus is based on the content of the Dictionary of the Scots Language (DSL), and every word will be linked to its source entry in the DSL.

The first two categories featured on the thesaurus website concentrate on Scots words for weather and sport – being two key talking points for Scots across the centuries.

Other Scots words for snow include:

“feefle” - to swirl, as of snow round a corner
“feuchter” - of snow: to fall lightly, to come down in odd flakes
“snaw-ghast” - an apparition seen in the snow
“spitters” - small drops or flakes of wind-driven rain or snow
“blin-drift” - drifting snow
“snaw-pouther” - fine driving snow
and “flindrikin” - a slight snow-shower

When it comes to sport, the topic proved as much a talking point for our Scottish ancestors as it is today. However it is not football that has the most sporting Scots words: it is marbles that takes the crown with 369 words.

They include:
“deaffy” – of a clay marble: dull in action, without bounce
“runtit” - having lost all one's marbles to one's opponent
“puggie” - the hole in a game of marbles into which the marbles are rolled
“nieve” - a method of cheating in delivering the shot by advancing the hand too far
“moshie” - a game of marbles using three hollows at regular intervals
“skeeler” - the rolling of a marble before a game to decide which player is to lead off

As well as snow and marbles, the new thesaurus covers sports such as golf and shinty, and the many Scots words for clouds and mist, and the team will be adding new categories over the next few months, including another large one - rain. Following the success of the first stage, they hope to secure further funding to allow the thesaurus to grow to cover more aspects of Scottish life and culture.

Dr Susan Rennie, Lecturer in English and Scots Language at the University of Glasgow, commenting on the research so far, said: “Weather has been a vital part of people’s lives in Scotland for centuries. The number and variety of words in the language show how important it was for our ancestors to communicate about the weather, which could so easily affect their livelihoods.”

“You might expect sports like football and golf to loom large in the thesaurus, but it turns out that there are actually more words relating to marbles - which is an indication of how popular the game has been with generations of Scottish children.

“There may be other words out there that we are not yet aware of, and that is where we would welcome the support of the public. If they use or remember words for particular sports or weather, we would love to hear about them. We also welcome photographs, which can be uploaded on our website. We already have some images online to illustrate Scots words for clouds, for example, but we would like more to make this a fully illustrated thesaurus.”

“ In revealing the semantic interconnections between words and concepts, this project will provide new insights into the riches and very essence of Scots as a language.

“It will be of interest to the general public as much as it will be to researchers, writers and teachers, and will provide a valuable resource for the teaching of Scots in schools.”

The online thesaurus will aid researchers, writers, schools and the public in studying Scots, by providing new ways to explore the rich resources of Scots vocabulary. The research team are also working closely with Scots Language Coordinators at Education Scotland to produce materials for use in schools.