The minister was visiting the site at the Queen Elizabeth University Hospital where the new Imaging Centre of Excellence (ICE) will be based. The ICE, supported by £16m of UK Government funding through the Medical Research Council as part of the Glasgow & Clyde Valley City Deal, will provide clinical research facilities which will be unique in the UK and create more than 200 new jobs for local people. The centre is expected to be completed by the end of 2016. 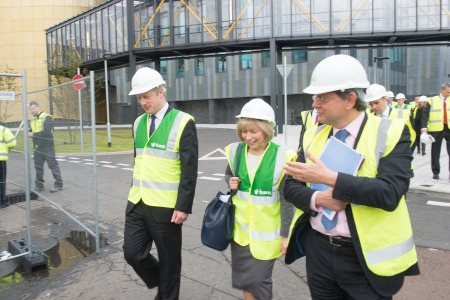 An independent analysis of the ICE’s economic impact concluded that the gross value added to the local economy over the next decade is likely to total around £65m.

The ICE will house state-of-the-art technology to enable scientists to conduct new clinical research. The ground floor of the building will house a variety of imaging technologies including a £7M 7 Tesla MRI scanner.

The 7 Tesla is an ultra-high resolution scanner which will allow the development of advanced diagnostic imaging methodologies for use in stroke, cardiovascular disease and brain imaging.

Anna Dominiczak, Vice Principal and Head of the University of Glasgow’s College of Medical, Veterinary and Life Sciences, said: “We were very pleased to welcome the Minister for Universities and Science to the site of the Imaging Centre of Excellence today.

“Patients will be present on site, with the building design accommodating acute stroke patients arriving by ambulance, day-care patients and healthy volunteers, via three dedicated entrances.

“The creation of an internationally competitive centre located within a university hospital campus, and incorporating NHS, academic and industry partners, will allow Glasgow to support a much greater volume and variety of clinical trials and translational development than currently, including benefits to the associated supply chain.”
Universities and Science Minister Jo Johnson said: “As a One Nation Government we’re investing in this flagship centre and supporting collaboration that will help cement Scotland’s position as a world-beater in research and help save millions of lives in the UK and around the world. Glasgow’s Imaging Centre of Excellence will create jobs, attract global investment and boost the Scottish economy.”
The centre will encourage collaboration between academics, industry and the NHS, with the layout of the building designed to facilitate and spark the creation of new innovative collaborations in imaging, such as a dedicated ‘collaboration zone’.

Medical Research Council Chief Executive Professor Sir John Savill said: “New initiatives such as the Imaging Centre of Excellence in Glasgow are at the heart of the Medical Research Council’s role in fostering collaborations between scientists, industry and clinicians to rapidly translate high-quality research into benefits for society. The sum of this work is often greater than its parts – the ICE will create a catalyst for the sharing of resources, ideas and ways of working to transform the care and treatment for patients and boost economic growth across Scotland and the rest of the UK”.

Alongside University of Glasgow researchers, corporate partners represented on site include Siemens and small to medium enterprises in the diagnostics and medical imaging fields, including from overseas. NHS staff on site will include clinical academic imaging specialists and those with clinical physics expertise.

Through these collaborations, ICE is expected to directly create local jobs, and is being designed to accommodate up to 260 staff, the vast majority expected to be new hires. The ICE will employ up to 40 clinical staff, 100 researchers and 120 more from industry.