A five-year study of giant pandas by Glasgow researchers has uncovered previously unknown details of the complex changes that a female bear’s milk undergoes immediately after birth. The findings may have implications for rearing in other species, including humans.

Research led by Professor Malcolm Kennedy of the University of Glasgow, and published today in the journal Royal Society Open Science, underlines just how important mother’s milk is to giant panda cubs. 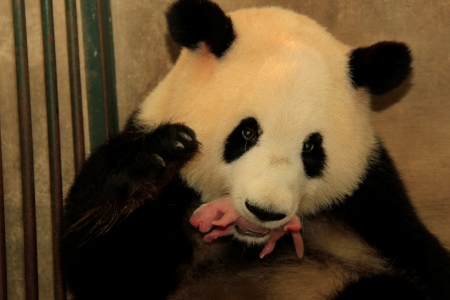 Professor Kennedy, Professor of Natural History, said: “Bear cubs are born at an extremely early stage of development. Bear milk may contain unique factors on which cubs depend for relatively prolonged periods for immune protection, gut microbiome health, and other physiological development.

He added: “Giant panda milk samples taken from birth to five months were found to contain proteins and other molecules that change more slowly from first milk (colostrum) to mature milk than in any other species of placental mammal. Antibodies and certain complex sugars important in anti-bacterial defences are central to these changes. Natural rearing is therefore crucial to the health and survival of giant panda cubs, as with all mammals.”

Professor Kennedy said his research was not relevant to the thorny issue of panda breeding in zoos, which, he says, is more to do with stress, misconceptions about their natural foods in the wild, and lack of socialisation.

Giant pandas have the smallest offspring relative to their size of any species among the advanced placental mammals to which humans belong. Their cubs are reliant on their mothers’ milk for a much longer time than most species. It takes 30 days at least for them to move on from first milk (colostrum) to mature milk.

Professor Kennedy explained that his research team – which includes Dr Richard Burchmore’s laboratory in the University of Glasgow, and Dr David Watson’s of Strathclyde University – has observed significant changes in giant panda milk that happened slowly but that are crucial to the development of their cubs.

These research findings demonstrated why artificial milk was a particularly poor substitute for natural milk in animal rearing. In China there is a tendency to encourage their giant panda females to keep producing cubs at an unnatural rate, which means that cubs are often reared on artificial milks and taken away from their mothers at an early stage.

The research team’s samples were collected from six captive-bred animals at the Chengdu Research Base of Giant Panda Breeding in Chengdu, in the Sichuan Province of China, over a period of five years. For comparison, the team also sampled the milk of grizzly bears, bottlenose dolphins, Indian and African bush elephants, polar bears, cows, dogs, and humans.

Prof Kennedy is also researching milk production by British grey seals and found them to be at the opposite end of the spectrum from pandas.

“Seals move to producing mature milk in as little as 24 hours, and they finish their lactation in 20 days – pandas have not even started making their mature milk by 30 days,” he said.

He continued: “One interesting aspect of the work on pandas is that one can observe changes in milk after birth happening in slow motion. That allows us to observe and better understand similar changes that happen more rapidly in other species, such as in humans.”