Can a chemical search engine explain how life began on Earth?

Scientists have developed a new form of ‘chemical search engine’ which could provide clues to the origins of life on Earth.

In a new paper published today (Wednesday 7 October) in the journal Nature Communications, a team from the University of Glasgow’s School of Chemistry describe a new approach to solving a 50-year conundrum   in which they used an automated robot system to explore many different random combinations of the building blocks of proteins. 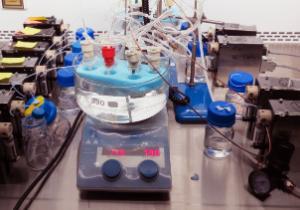 The team found that peptide compounds of long length and complexity can form in a very simple way by heating and cooling the building blocks as they go through wet and dry cycles.

The research was led by the University’s Regius Chair of Chemistry, Professor Lee Cronin. Professor Cronin’s group has previously researched methods of creating inorganic life and have also created the ‘chemputer’, a 3D printer-inspired robot which can synthesize complex chemicals. This new piece of research brings concepts from both projects together.

Professor Cronin said: “Proteins are some of the basic building blocks of life, and we’ve long known that they make up the working machinery of living cells. However, we’re still struggling to determine whether proteins came first or if the genetic machinery of DNA or RNA did.

“The problem is that the origin of life was thought to be so complicated that we are not sure if there was enough time to make such complex molecules or understand themechanisms by which they were produced.

“Our research aimed to help answer this question by creating a robot capable of creating many different random combinations of conditions, and them focusing in on the promising ones. Very quickly, we found that it was possible to assemble the building blocks just like the way we find them in modern proteins Our chemical search engine is able to search large amounts of chemical space, similar to how systems like Google search the internet. Instead of reading HTML, however, the system performs chemical reactions.”

The team conclude that small protein fragments can be made much longer and much more easily than previously thought, which could lead to the formation of life-like molecules and machines in the laboratory.

The team’s robot system allows the researchers to record very precisely how many combinations of chemicals and the outcomes of the reaction, which will help them to calculate the likelihood of producing the first complex molecules essential for life as we know it today.

Professor Cronin added: “We believe this is a significant finding which could suggest that the beginning of life on Earth was a simpler process than we previously expected. It could also provide valuable support to the idea that the universe is teeming with life, as well as allowing us to ‘search’ for new types of life in the laboratory.”

The team’s paper, titled ‘Formation of oligopeptides in high yield under simple programmable conditions’, is published in Nature Communications. The research was funded by the Engineering and Physical Research Council (EPSRC) and the Royal Society-Wolfson Foundation.