First volume of the selected letters of Edwin Morgan published

‌The first published collection of the selected letters of one of the most influential figures in Scotland’s twentieth century literary history will be launched today (27 March). 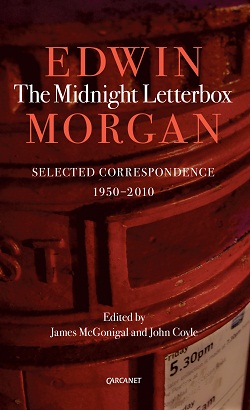 The collection will be launched at an event at the University of Glasgow, where Morgan spent the majority of his academic career, both as student and teacher.

The Edwin Morgan Papers are held in the University of Glasgow Library’s Special Collections department and comprise over 280 boxes of material. Over 90 of these contain correspondence (1946-2009) which offers a unique insight into his development as a poet, covering his interests and the inspirations which underpinned this, as told through conversations with friends, colleagues, collaborators and publishers. Details of the collection can be browsed and searched online.

Among the selected letters are a 1952 letter to the publisher of his translation of Beowulf, a description of watching the first moon landing in July 1969 and a 2003 letter on why poetry is important to him.

Other collections are Morgan's library, held by the Mitchell Library in Glasgow, and the collection of Morgan's publications, held in the Scottish Poetry Library in Edinburgh.

Morgan graduated in English Language and Literature from the University of Glasgow before joining the staff of the English department, eventually becoming titular Professor of English from 1975 to 1980. Later he was made Poet Laureate for Glasgow, 1999 to 2005, and in February 2004 he was appointed as the first "Scots Makar" or National Poet, by Scotland's First Minister.

The Selected Correspondence has been edited by Professor James McGonigal and Dr John Coyle, from the University of Glasgow’s School of Critical Studies.

Dr John Coyle, Senior Lecturer in English Literature at the University of Glasgow, said: “Edwin Morgan was a teacher and, in selecting from his letters, we were continually amazed at his life beyond the lectern.

“The letters reveal the character of the man and poet – they are lively, acute, astringent, serious and playful, and the range of moods and contexts in which he wrote is astonishing. Above all what emerges is his creativity and responsiveness to life; this also includes his political views, humanely expressed. This collection is only a selection and a fraction of the riches to be found in the Edwin Morgan Papers in the department of Special Collections in the University of Glasgow Library. We hope that others will be drawn to explore further.”