An experimental technique to help stroke patients regain the use of their arms has shown promising results in a small-scale trial.

Vagus nerve stimulation (VNS), which aims to encourage the growth of new neural connections in the brain, was shown to help patients in Glasgow improve arm function by a greater degree than standard physiotherapy alone.

Additional patients are being invited to participate in a follow-on clinical trial to further expand the post-stroke rehabilitation program and to ascertain the potential wider benefits of the therapy. 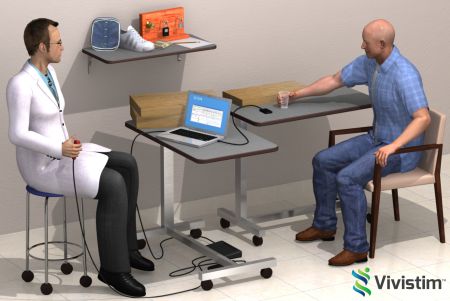 A stroke occurs as a result of a loss of blood supply to a part of the brain, leading to tissue death and loss of functions controlled by the affected brain area. Around 85% of stroke victims seen at Glasgow’s stroke clinic in at the Western Infirmary have arm weakness, which persists to a significant degree in half of these.

Presenting his results at the International Stroke Conference in Nashville, USA last month, Dr Jesse Dawson, of the Institute of Cardiovascular & Medical Sciences at the University of Glasgow, who led the trial efforts, said: “There are no proven treatments beyond general rehabilitation strategies to improve hand function after stroke. A few methods may benefit the shoulder-elbow function, but nothing yet has worked to improve hand function.

“Vagus nerve stimulation has been suggested as a way of utilising neuroplasticity in the brain to drive the growth of new neural connections related to a specific body movement. This involves implanting a nerve stimulator, which provides electrical impulses during physiotherapy sessions.

“We need to do larger trials to confirm our findings and determine if the widespread adoption of this technique could benefit post-stroke patients with upper limb deficits. These initial results are certainly encouraging and warrant further investigation.”

The two-year trial, which recruited 20 patients in Glasgow and Newcastle with long-term arm weakness after their stroke, involved the implantation of a small electrical device into the body.

The electrical device is similar to a pacemaker and is implanted in the chest region of the patient. It then is connected to the vagus nerve in the neck using thin wires that are also implanted.

Scientists chose to stimulate the vagus nerve since it connects to structures in the brain that are involved in recovery from injury.

The researchers in this study hoped this process would significantly improve arm function during the recovery process following the stroke. The study recruited volunteers who had suffered ischaemic stroke at least six months earlier with moderately severe arm problems.

The patients were split into two groups, one group receiving intensive physiotherapy alone, the other receiving physiotherapy paired with VNS. When patients followed the study protocol in full, there was a significantly greater improvement in a measure of arm function called the upper extremity Fugl-Meyer score.

The scores of VNS treated patients were six points higher than those who did not receive VNS in addition to their physiotherapy. When patients have such a large change in their score, noticeable improvements in arm related tasks can be observed on a daily basis.

The trial was run in partnership with Texas-based biomedical company MicroTransponder, which developed the Vivistim™ device.  A similar VNS device made by another company has been used for over 17 years to treat more than 80,000 people with epilepsy.

All patients received therapy three days a week for six weeks and each session took two hours and involved many repetitions of different tasks as part of the standard physiotherapy.

For the patients receiving the paired VNS, a brief half-second of stimulation is delivered while the patients perform rehabilitative tasks.  The brief stimulation is initiated by a push button trigger held by the therapist, which then sends a wireless signal to the implanted device via a laptop computer and wireless transmitter.

The primary aim of the study was to assess safety and feasibility but there were pre-defined efficacy analyses which researchers hoped would provide data to help them design future studies.

No safety issues arose during the trial and a larger study is now planned in the US, in Dallas, Houston and Minneapolis. Enrolment is now open to people who live close-by and the sites are seeking patients who’ve recently had a stroke and are still experiencing upper limb movement limitations. Further information is available at www.vnsstroketrial.com.

Anyone interested in taking part in future VNS stroke trials in the UK should email: mvls-armweakness@glasgow.ac.uk